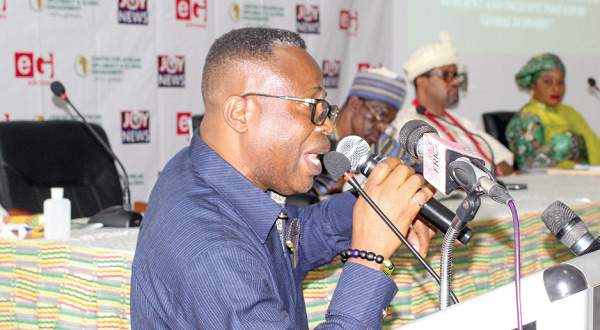 A research and training centre for the promotion of public engagement on global policy issues, training and scholarly research has been launched in Accra.

The facility which was inaugurated by the Speaker of Parliament, Alban Sumana Kingsford Bagbin, will focus on building networks across some African countries such as Nigeria, South Africa, Kenya, Egypt and other organisations such as the AU, ECOWAS and the UN.

It will also identify areas of common interest on the African continent and position it as a place of opportunity for business and investment, while offering practical training to public and private sector agency diplomacy, negotiations and contracts.

It was launched on the theme: “Mobilising global citizenship in building resilient and inclusive post-COVID-19 global economy.”

The event was attended by stakeholders, including representatives from civil society organisations (CSOs), researchers, academia and politicians.

The centre was established by an NGO, the Centre for African Diplomacy and Global Engagement (Afro-Global).

Mr Bagbin said the centre could also play a role in providing an alternative approach to deepening diplomacy to help solve global problems as well as provide support for initiatives such as the sustainable development goals (SDGs).

Additionally, he said the centre could promote the values of humanity by drawing attention to discrimination and modern-day slavery and further demand reforms in rural governance institutions and processes.

“We in the legislature are struggling to establish a world Parliament. Our international community is in urgent need of political engagement and diplomacy that is preventive in order to renew and rebuild multilateralism,” he added.

Mr Bagbin further said that “while global leadership has failed and continued to disappoint in promoting real inclusiveness, situational leaders must emerge to fill the void”.

“For professionals in diplomacy, reliable data produced through credible research is of upmost importance.

“Researching and making reliable available data serves to invite actors in diplomacy to contribute to solving global challenges,” he said.

The Director of the centre, Prof. Lord Mawuko-Yevugah, said there was little or no discussion on national discourse and international affairs in the media landscape.

He said it was partly because of this reason that a group of researchers came together to form the centre that was Africa-oriented.

According to him, academic publications would be a core activity at the centre to contribute to international scholarship on Africa's global and diplomatic relations.

“The centre will be a resource base for researchers and policymakers across the African continent to engage critically in policy debates and decisions.

“It will also serve as an advisory body to public and private organisations in the field of global and diplomatic relations,” he added.