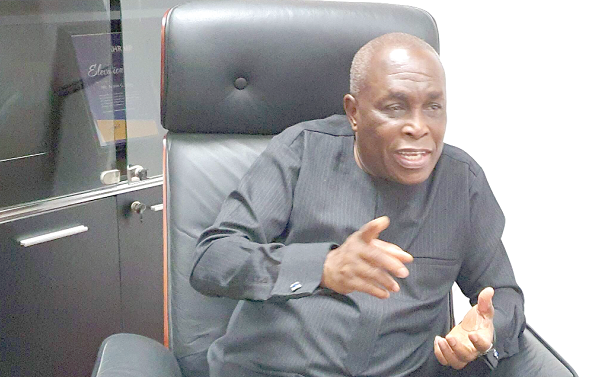 The conversation centred on the economic challenges vis-a-vis the recent labour unrest. It also focused on his orientation on the labour market and the role of dialogue in resolving issues.

Find excerpts of the interview below.

Benjamin Xornam Glover (BXG): Following Ghana's current economic challenges, many Ghanaians, including those on the labour front, have called for a national dialogue to seek ideas to address the challenges. Has the government engaged Ghanaians, including organised labour, enough in order to come out with an acceptable solution?

Austin A. Gamey (AAG): I am among the first, if not the first, among the early birds who called for a national dialogue. I said, among other things, that it should be styled in the form of a Senchi-like dialogue because I was very active in it myself and saw the fruitfulness of the outcome.
Seeing the challenges ahead of us I saw that if we will go to the International Monetary Fund (IMF), then we should go early because the symptoms were very clear that we should go and if we didn’t go, we were going to go in an ambulance.

Going to hospital in an ambulance, the way they will treat you is different from when you saw the symptoms and went in yourself; then they can handle you differently as well. I am very sad, to be honest with you, that we have gotten to a place where we have to go to the IMF in an ambulance and we are being handled from an Intensive Care Unit point of view.

That is not fair to the whole nation. That said, whatever has happened has happened already and so we now have to have a solution. A solution that will help all of us as a nation and not from the lenses of traditional partisan politics.

I strongly look forward to us having that kind of conversation and having a solution that will help the entire nation. Whatever needs to be said, will be said from an impartial point of view. We (at Gamey and Gamey) are consultants and in mediation processes and we don’t support governments, we support Ghana as a nation.

I support clearly the need for the President to succeed, particularly at this trying moment, so whatever we will do to profess an idea we will and that’s going to be my attitude. We are in big trouble as a nation.

As the President himself put it, we are in crisis and if you are in crises, your approach to things is different from when normalcy is there. Yes, I will say a national dialogue is urgent.
When we go for such dialogue, we are going to have a facilitated conversation and these conversations will define the quality of what we want to do as a people.

It is not going to be a game as usual, where a President or ministers of state will come and give speeches and go away, but there will be participants like anyone else like we did at Senchi. I was there, I wasn’t told.

We actively participated and worked and came up with a report (which is available for all) and there is nothing that anyone will do extraordinarily from that home grown policy, except to be updated in terms of today and language. That is just about it.

So, we have to go and have it done now, almost immediately. We should not be selective; we should open it up. Not that we are going to have equal numbers, so called, but people should be invited based upon the kind of knowledge, skills and experience they have, so that together we can openly build our nation anew. That is what we must do and I am open to that.

BXG: Is there any place for labour to contribute to resolving the current economic challenges?

AAG: Very critical, our Labour Act, 2003 Act 651 is one of the most creative and innovative labour laws in the world.

As if we knew, we extensively discussed and brainstormed for well over four years at both international and local fora and we concluded that we must include in the law, Section 112 to establish a National Tripartite Committee (NTC) and among other things under section 113, the functions given to the NTC includes (c), to consult with the trade unions, employers and government on matters of the labour market and the importance of the economy.

This is the only nation under the sun where you have a legalised national tripartite, nowhere else in the world. So, organised labour must take advantage of such provisions under the law, not to go there to argue and debate but to have a consultation in a conversational format, which will define the quality of their relationships and in the best interest of their members and the nation as a whole.

The NTC is also mandated to consult with the social partners in the determination of the national daily minimum wage, which is now way below a litre of petrol and diesel. Going by what is happening today, Ghana is in a certain situation, where you need to have labour onboard, properly so onboard, so I am even amazed that till date, they have not called a special NTC meeting, where the Ministry of Finance, Ministry of Trade, Health and Education and the Office of the President are represented.

Possibly the government side led by the Vice-President and the Minister of Employment and Labour Relations, to engage with all the seriousness it deserves.

Organised labour made up of members of TUC and other players must be present for a meeting to be facilitated and not the traditional “this is my position” style. We don’t need positions; positions are for those who are not “civilised”. We must go to that meeting with the view of finding a common solution that will satisfy the needs of the people we lead and as a nation.

That is where we are now. Yes, labour has an important role to play and this is grounded in Section 113(c) of the Labour Act 651. Clearly, we are in very serious trouble, and this is the time to call that urgent meeting.

BXG: Should labour unions be concerned about the ongoing negotiations with the IMF and the impact if any of those negotiations?

AAG: The IMF is simply a confident building institute to offer the country some respite and give investors hope. Unfortunately, the money they are expected to bring will not be enough in
view of the huge crater we find ourselves in.

To be honest with you, the IMF is not the solution to our problems. That is why we must have a national dialogue to determine the way forward ourselves and not rely solely on the IMF.

BXG: In light of the recent economic challenges, how will you score the President’s address to the nation? Did the President offer hope in the midst of our economic crisis, beyond the assurance of no hair cuts?

AAG: I have to be very honest; I don't have the pleasure of time to dwell on the partisan politics of it but on the politics. Politics is about decision-making process but partisan politics leads you to another bracket and I am completely out of that joint. In view of the reality that confronts us today, I think the address was not too strong.

The President said so many things that were good but were not too strong to alleviate our plight. It has to be stronger than what he delivered. People want the quality of his leadership to emerge. Do we have too many people around the presidency, in the ministries? Can we merge some of these ministries? We should merge some of the ministries and reduce the numbers to about 55 thereabout and ensure that people account for their stewardship in terms of meeting their targets.

The law says under section (8) (b) that all employers must set targets for their workers and the political office holders are workers of the state — hence we must be given targets and appraisals conducted quarterly by the Chief of Staff and whoever failed to meet the targets may suffer some penalty, and so should same apply to all workers in the public service to promote quality productivity.

BXG: Has Parliament lived up to expectation so far?

Hence they (MPs) cannot approve anything without due consultations with the people who sent them to the House. It is not the NDC or NPP who sent them to the chamber. It is the people. They are representatives of the people and so Parliament, even if we don't amend the constitution, must be able to control the President's powers, not from a partisan parochial point, but from a political point of view.

Let me give you an example. Around 1994, with almost 100 per cent NDC MPs, Professor Kwesi Botchwey brought a budget inclusive of petroleum pricing hikes to Parliament but we rejected it and sent it back to the executive to have it changed.

We were almost 100 per cent NDC MPs but we didn't care. It was led by me, Johnson Asiedu Nketia and Hawa Yakubu who joined as an Independent MP. That is what we did. What do we see today?
It is all partisan. We should stop it.

BXG: How will you describe the call by some members of the Majority for the resignation of the Finance Minister and is the process to pass a vote of censure by the Minority, the way to go?

AAG: Both sides in Parliament should join hands if they think any minister is not doing well. I have listened to the President’s appeal. It is not always true that we should all necessarily be present when things are not going well. Is it true that people have resigned before in the world? Yes.

Is it true that cabinet reshuffles have been done before? Yes. So, it can be done. I appreciate the difficulty the President finds himself in, but we have over 30 million people and he should take the views of the people into consideration.

BXG: Is there hope?

AAG: Between now and December, our hope must be on God and God alone. God uses human beings, therefore, it is my prayer that God will use the group of people sitting with the President and having conversations around issues confronting the nation to call for a national dialogue, otherwise there is no hope.

What should be the posture of opposition in Parliament? Like I heard former President Mahama say, no one must gloat over the challenges facing the country. It is not just an NPP problem; we must all come together as representatives of the people to help salvage ourselves.

I am so proud of our security agencies. They have been loyal to this nation and we must applaud them. Unlike what is happening in other neighbouring countries, our security agencies have come to a maturity level and we must applaud them. The onus now lies on civilians to join hands with them to build this nation again through meaningful national conversations.