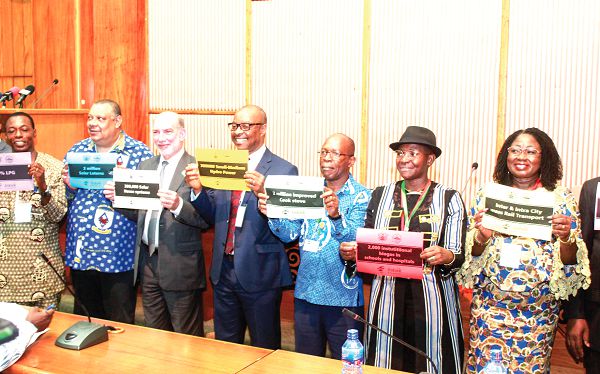 The African Development Bank (AfDB) is to offer Ghana a $20-million loan facility to support women entrepreneurs in agriculture and agribusiness in the country.

The fund will be channelled through the Ghana Incentive-based Risk-sharing System for Agricultural Lending (GIRSAL), which leverages lending to people in agriculture and agribusiness through a risk-sharing scheme.

The facility, which will be disbursed in the middle of 2019, forms part of the bank’s efforts at addressing the challenges women in agribusiness face in accessing funds in Africa.

Ghana will be the first country in Africa to receive the facility under the AfDB’s Affirmative Finance Action for Women in Africa (AFWA).

The Director of Climate Change and Green Growth of the AfDB, Dr Anthony Nyong, who made this known to the Daily Graphic in Accra last Tuesday, said: “This loan will be given to women entrepreneurs in agriculture and agribusiness at much discounted rates.

We are finalising the development of the project with the GIRSAL and I hope that in the next two months we should be done with the project development and the fund will be disbursed out to Ghana soon.

“With our Affirmative Finance Action for Women, we want to encourage positive discrimination towards women and I am so sorry that men will not have access to this fund.”

Dr Nyong stated that as part of the bank’s commitment to its gender equality agenda in line with the vision of the African Union, it had developed a 10-year strategy to be implemented from 2012 to 2022.

He explained that the strategy was aimed at supporting inclusive growth in Africa, saying: “Some African countries have discovered new sources of oil, dug and sold them out and their GDP rose up, but their gender and human development indices are still very poor”.

According to him, the AfDB was pursuing a paradigm that would leave “no one behind to ensure inclusive growth”.

“As a bank, we also consider that women form between 60 and 80 per cent of the labour force in agriculture, which means that most food production is done by women. But, incidentally, women do not have access to credit as their male counterparts do.

“In most cultures in Africa, women do not even own land and, for that matter, cannot invest in the land or use it as collateral to get loans,” he stated.

Dr Nyong further observed that many women on the continent had low access to credit facilities.

“The bank’s Affirmative Finance Action for Women in Africa is specifically created to target women and provide them with resources to undertake agribusiness ventures,” he said.