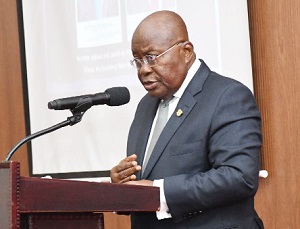 President Akufo-Addo addressing the audience at the official launch of the Law Reform and the Legal Aid funds. Pictures: EBOW HANSON
30.5k Shares

Access to legal services by the ordinary citizenry has received a boost with the launch of two funds to enhance the justice delivery system.

The objective of the Legal Aid Fund is to ensure the financial capacity of the LAC to efficiently and effectively carry out its mandate, while the objective of the Law Reform Fund is to help the LRC undertake projects for the development and reform of laws, develop human resource in law reform, among others.

The sources of both funds include money approved by Parliament, interest accruing from the investment of the funds, donations, grants and gifts.

The President, Nana Addo Dankwa Akufo-Addo, who launched the two funds in Accra yesterday, also announced a GH¢100,000 personal contribution to each of the funds.

He said the funds were to ensure the financial capacity of the commissions to efficiently and effectively carry out their mandates. 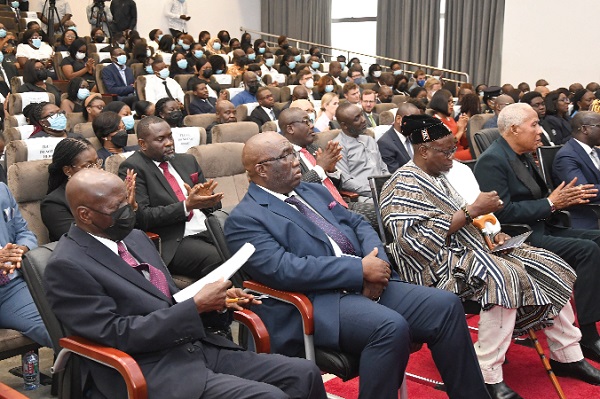 He said building a modern legal and justice system for the country could never be compromised, in spite of the challenges faced by the two commissions.

“The promotion of the rule of law is of utmost importance and cannot take a back seat, no matter the current circumstances. It is necessary for the government to lend its support to the institutions whose objectives promote the cause of the LAC and the LRC,” he said.

With the launch of the funds, the President said, he was hopeful that the two commissions would be ushered into a new progressive chapter to discharge their duties effectively.

The LRC has the objective of promoting law reform in the country by receiving, considering and making proposals for the initiation and reform of any law in the country.

The LAC, on the other hand, is tasked with providing legal aid for indigents and persons who have reasonable grounds to take, defend, prosecute or be parties to proceedings related to the Constitution.

The President urged stakeholders in the justice delivery sector to contribute generously to the funds.

He assured the Attorney-General and Minister of Justice, Godfred Yeboah Dame, who spearheaded the operationalisation of the funds, that the government, through the Ministry of Finance, would provide adequate resources for the sustainable and effective discharge of the duties of the two commissions.

For his part, Mr Dame explained that the funds were the building blocks for the transformation of the two most important institutions whose mandates were crucial for enhancing access to justice delivery in the country and the modernisation of the country’s laws.

He noted that even though the laws that created the two commissions provide for the setting up of the funds, the reality had been far from it, leading to the existing infrastructural and logistical challenges.

The Attorney-General, therefore, tasked both boards to come up with innovative means of ensuring that sufficient contributions, donations and grants were made to the funds for the smooth discharge of the commissions’ duties.

He also reiterated his pledge to ensure that land was acquired for the construction of permanent offices for the LAC after the completion of the Law House project.

On the LRC, Mr Dame indicated that if it was effectively assisted, it had the ability to transform the socio-economic fortunes of the country.

In a speech read on his behalf by a Justice of the Supreme Court, Justice Jones Dotse, the Chief Justice urged the Ghana Bar Association to endeavour to include pro bono cases handled as a criterion for the renewal of lawyers’ licences.

That, he said, would go a long way to boost the work of the LAC because not many lawyers would be paid out of the fund, yet its work would be facilitated expeditiously.

“Lawyers are expensive, and to access a good quality lawyer, you need to pay some fees beyond the reach of ordinary people,” Justice Dotse said.

“Therefore, the setting up of this fund must be embraced by all; but I will go further and urge the GBA to endeavour to inculcate in its members the need to do at least one or two pro bono services a year to enable them to renew their operating licences,” he added.

The Board Chairman of the LRC, Anthony Akoto Ampaw, said the commission suffered an acute lack of basic resources, including human, infrastructure and financial, saying the fund would enable it to fill in the gaps.

“We hope that this fund and the commission itself will generate generous donations from all stakeholders from the Ghana project and the rule of law in Ghana,” he said.

The fund, he said, would also attract to the commission highly qualified persons with expertise in research, a passion for law reform and the drafting of ethical legal texts, as well as help the commission move into a better office.

For his part, the Board Chairman of the LAC, Justice Nene Amegatcher, underscored the critical role of legal aid, saying without access to justice, people who lived in abject poverty could be ignored without a voice in advocating justice for themselves.

He added that funding was a critical element in improving access to justice, hence the need to ensure that the commission received its funds on time, as the GH¢20,000 allocated to it as budgetary support for the year was yet to hit its account.