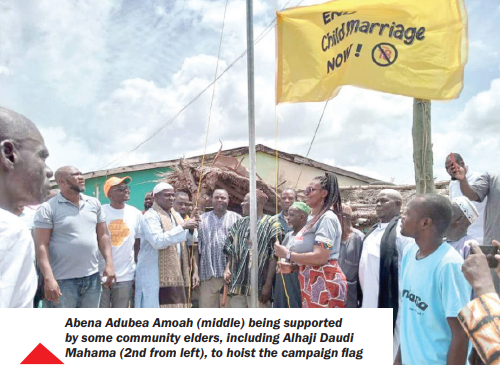 In most parts of the country, adolescent girls generally have difficulty equipping themselves and accessing opportunities on the job market, except where traditional leadership exercises strong influence over their access to education.

In communities where money is scarce, the choice of educating children favours the boys than the girls and is hinged on cultural beliefs.

Parents have the impression that girls do not do well at school and so when the girls fail, it becomes a prophecy fulfilled.

Despite the fact that some cultural practices that inhibited girls’ education have been revised, it is still the norm for some girls to be forced into early marriage, with the explanation that they are ordained to be caretakers of the kitchen and should, therefore, be confined to that space.

In many parts of the country, the problem of child and forced marriages continues to impact negatively on the health, well-being and positive development of female adolescents into adulthood and limits their economic and individual empowerment.

It is the reason many programmes and campaigns have been initiated to rescue the young females from the throes of the backward practice.

At the re-launch of a Child Marriage Free Community Alert Campaign in Wa in the Upper West Region last Tuesday, the Executive Director of Planned Parenthood Association of Ghana (PPAG), Abena Adubea Amoah, said most often, the forced and early marriages did not favour the adolescent girls because they were usually married to old men.

The event which had in attendance various traditional leaders, opinion leaders, heads of department and civil society organisations was initially started in June 2018 in five communities in the region to end child marriage.

The five communities are Dondoli, Sagu, Kpongu, Gbeguru and Charia-Zingu. She said over the years, over 30 communities had joined in the alert campaign leading to tremendous reduction in the number of early child marriage cases.

The re-launch of the community alert campaign by the PPAG, funded by United Nations Population Fund (UNFPA) was, therefore, to mobilise and challenge various chiefs to join forces to resist and fight child marriage in the region.

Ms Amoah said the campaign was to remove the challenges early child marriages had brought to girls over the years.

Some of the results of child marriages have been dropping out of school and the inability of the young girls to attain their desired goals to become productive in society.

“The youth are the future of the country and it is incumbent on all to ensure that they guide and mould them into responsible adults,” she said.

She added that education was a poverty eradication programme which would assist empower girls economically, and thus appealed for a review of the cultural practices and beliefs that would benefit the youth, especially girls.

Ms Amoah bemoaned the high spate of teenage pregnancies and other risks which not only negatively impacted on their health but left them confused, depressed and mentally unstable, making them become social misfits.

“Fighting child marriage has become a core developmental and human rights issue under the Global Programme to End Child Marriage. To effectively tackle the harmful practice, it calls for a multi-sectoral approach,” she said.

The National Programme Assistant of UNFPA, Faisal Bawa, urged parents, especially mothers, not to shirk their responsibilities toward their daughters by pushing them into early and forced marriages where they were exposed to a lot of risks.

Mr Bawa said when girls grew up, they took better care of their aged parents than their brothers, who upon their marriages moved away to cater for their wives and children.

An officer at the regional police station, Chief Inspector Stella Niabi, said the police had been dealing with many cases of child and forced marriages and their attendant issues of sexual abuse and the lack of maintenance to both women and children.

She said the practice was not acceptable since it was a violation of the victims’ fundamental human rights. She called on all to put an end to it to enable the girls to develop their potential in order to be useful to society.

“For every child that gets married off, a whole generation is drawn into poverty, educational aspirations are truncated and there is a destruction of family economic stability. In most cases, this has led to a vicious cycle, where the children of survivors of child marriages are also married off at an early age and into poverty,” Chief Inspector Niabi said.

On behalf of the chiefs and elders, an elder, Alhaji Daudi Mahama, pledged their commitment to support and protect the children to ensure that they attained the highest level of education and their chosen careers.

“We want to see our children, especially our daughters, grow up in safe, supportive and friendly communities where they will be free to enjoy their childhood and youthful stage without fear of being forced or married off too early and against their will,” he said.

A special flag was hoisted by the members of the campaign as a symbol to mark the event.