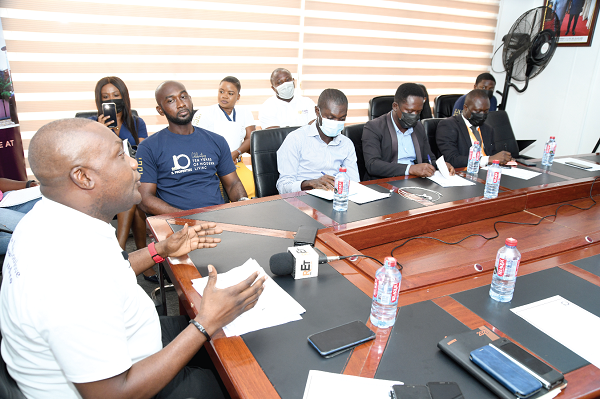 Dr James Orleans-Lindsay (left), Executive Chairman of JL Properties Limited, addressing the press during the launch of the 10th anniversary of the establishment of the company. Picture: EBOW HANSON Follow @Graphicgh

The Executive Chairman of JL Properties Limited, Dr James Orleans Lindsay, has called for mergers and partnerships among local estate developers to mobilise the resources needed to augment the government’s effort to provide decent public housing and reduce the country’s housing deficit.

He said such partnerships were required to raise the finances needed to execute big ticket projects such as public affordable housing for all classes of the Ghanaian society.

“In this country, it is difficult for businesses to merge or even partner to execute projects but from where I sit, and looking at the gap between property owners and seekers, we have to do something drastic and that includes partnerships among ourselves,’ Dr Lindsay said.

Dr Lindsay made the call last Tuesday at a ceremony in Accra to mark the 10th 1anniversary of the establishment of JL Properties Limited, a wholly owned Ghanaian estate developing company with a track record of providing decent inner-city housing for the middle-class.

Dr Lindsay said to tackle the housing challenges in the major cities in the country, especially in Accra, there was a need to create a mini city with all the essential amenities available somewhere on the outskirts of the city to encourage individuals and families to relocate outside the city which was already choked.

“We are looking at creating a mini city at a place next to Accra like Dodowa with about 2,000 housing units,” he said.

“But with such projects, the funding must be available and that is where partnerships come in,” he explained.

He said the company would in the next 10 years construct 10,000 homes across the country to help provide decent housing for the Ghanaian working-class.

The company, he said, would devote some 30 per cent of its work to the expansion of social housing in the country.

Funding for both projects, he said, had already been secured and feasibility studies were ongoing.

“We need to look at the affordability aspect very well because I have spoken to a few institutions wanting us to construct 1,500 homes, others 1,000 but they are unable to meet the mortgage criteria –why should a nurse, teacher not be able to afford a three-bedroom home –so those are the people we should be targeting and that is why we need to look at how we can drive down the cost of homes,” he said.

The company has in the last 10 years developed over 1,000 residential houses within prime areas in Accra with a vision to soon venture into 3D concrete printing.

‘’In the next 10 years, we are going to do something around 300 homes and then we graduate, until the end of the third year by which we believe that we would have built a 3D concrete printing factory –with this we would be able to do homes in 16 days still using concrete,” he said.

According to Dr Lindsay, discussions with consultants from Nigeria and China as well as the Africa Development Bank, ECOWAS Bank for Construction and Development for the construction of the 3D concrete printing factory were still in progress.

Addressing climate change, Dr Lindsay said the company’s specialty was to develop disused sites in cities such as dumpsites or landfill sites into decent living spaces.

‘’Each home is built to high international standards using modern technology and fittings to stand the test of time.

There is also one tree planted in each of the homes we have built.

If you look around the communities we have built, all the roads are constructed with rocks and not bitumen to help reduce the effect on the climate,’ he said