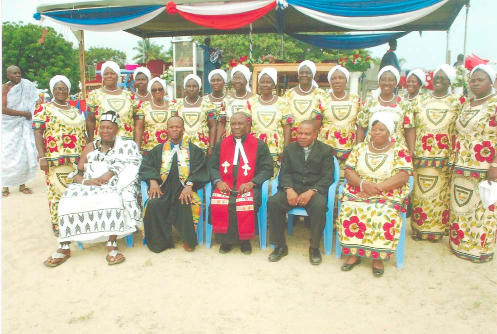 The new executive with some of the dignitaries at the function
30.5k Shares

The Dangme-Tongu Presbytery Women’s Fellowship at Ada-Foah in the Greater Accra Region has ended a four-day conference to mark its 35th annual conference.

The conference was on the theme ‘’When the Holy Spirit moves.”

Speaking at the conference, the Chairperson of the Dangme-Tongu Presbytery of the Presbyterian Church of Ghana, Reverend Samuel Atteh Odjelua, stressed the need for Christians to fully support the initiatives of any government in power for the holistic development of the country.

He advised women to be good home keepers and to train the youth to be responsible to the environment. “Avoid littering of the environment and keep God’s creation in good shape. As Christian women we need to keep our homes and families clean to reflect the good things God has made rather than destroy them,” he stressed.

Rev. Odjelua noted with concern that Christians were part of the larger society and could not in any way be separated from it.

He also called on Christians to support any government in power with prayers for God to guide them in whatever they were doing with the national resources for the benefit of all.

’So long as we Christians are also citizens of this country, we need to support government in its implementation of policies that will bring about development to our communities and the country in its entirety,” he said.

He added that the bottom line of any government was to bring development to the people and Christians must be seen to be active in that direction, since they formed part of the larger society.

Using the sub-theme of the conference, ‘Let your light shine’’, he advised Christians to always act positively and exhibit the true nature of God, saying ‘your nature and your lifestyle will help others accept Christ.’’

He said the development of the nation came in many forms and urged the women fellowship members not  to think about their contribution to the church alone but also  society in general especially in the area of sanitation.

‘’In conclusion, let me stress that as women let us go out there and remain committed to the Presbyterian church and our localities, remain united and avoid sectionalism, and allow the holy spirit of love to bind us together and be responsible by taking part in everything that promotes development”, he ended.

The Paramount Queen of the Ada Traditional Area, Naana Kabukie Dumaaley I, said the manner in which the youth were dressing these days was worrying as they had copied Western culture blindly, and appealed to the women to wage a war on that.