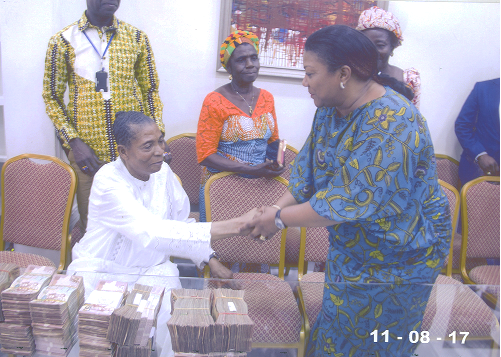 The Founder and Leader of the Kristo Asafo Mission of Ghana, Apostle Dr Ing. Kwadwo Safo, has donated GH¢500,000 cash to the First Lady, Mrs Rebecca Naa Okaikor Akufo-Addo, to support her initiative to build a new mother and child care unit for the Komfo Anokye Teaching Hospital (KATH) in Kumasi.

Making the donation to the First Lady in Accra last Friday, Apostle Safo said the donation was the contribution of the church towards the project intended to save mothers and babies at the hospital from needless deaths.

The new mother and child care project is to avert the numerous deaths recorded over the years due to lack of space, facilities and other equipment at KATH.

In May 2017, the First Lady cut the sod for work to begin on the project which is expected to be completed in four months.

The campaign, dubbed “Save a child, save a mother, save them”, is hoping to raise an initial GH¢10 million.

Work on the project is currently at the lintel level.

The congestion at the Mother and Child Care Unit at KATH in Kumasi reached an alarming stage, leading to the deaths of several pregnant women and their babies.

Before the campaign, the labour ward had eight beds and two delivery beds, while the maternity block had two theatres, of which only one was functional.

The nursery had only 24 cots, although the hospital delivers about 15 babies on the average daily, in addition to many baby referral cases, a situation that caused congestion at the nursery.

Due to the limited number of cots, four or five babies had to share a cot, a situation which caused infection and reinfections among babies.

He recounted how he had on behalf of Kristo Asafo supported children’s homes, rehabilitation centres, orphanages, prisons, hospitals, schools for the blind, deaf and physically challenged with food items, clothing, sewing machines, wax prints and cash for over three decades.

Receiving the donation, Mrs Akufo-Addo commended Apostle Kwadwo Safo for the wonderful and kind gesture which would help in the completion of the first block, which was nearing completion, and called for more support and collaboration