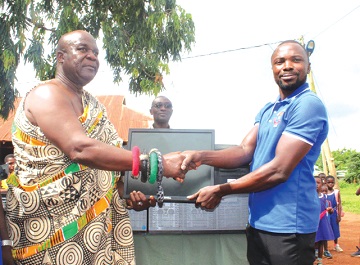 The Akyem Kotoku Mponua Gyasehene of Pankese, Nana Kwesi Addo II, has donated 15 desktop computers to three schools at Pankese in the Birim North District in the Eastern Region, to enhance the study of Information and Communication Technology (ICT) in the beneficiary schools.

At a short ceremony held a fortnight ago, the chief gave five desktop computers to each of the three schools in the Pankese community which were the Pankese District Assembly (D/A) Junior High School (JHS), Pankese Roman Catholic JHS and Pankese Emmanuel Methodist Basic School.

In an interview with the Daily Graphic, Nana Kwesi Addo II said he felt a sense of responsibility to help the schoolchildren in the community to have a feel of practical ICT education so they could compete with their counterparts in the cities.

"We live a competitive world, and ICT is currently dominating the world. Our children in this village are expected to compete with their colleagues in the urban cities, but here they are without any computers to learn with," he said.

The Gyasehene of Pankese also appealed to the government to attend to the needs of the Pankese community with the provision of a health facility and a senior high school.

"The Pankese community is developing gradually; I want to appeal to the government to also pay attention to Pankese. We need a hospital and a senior high school, at least to befit our status as a developing community.

“These would bring jobs to many young people in our community, to address some unemployment situations and its consequences in this enclave. At the moment, community folks travel far distances to the nearest cities for health care and secondary education, which have been long overdue," he said.

The head teacher of Pankese D/A JHS, Peter Kwaku Ofori, commended Nana Addo for his gesture, which he described as timely to help improve the learning of ICT in the school.

He told the Daily Graphic, in an interview, that teachers used their phones and laptops as well as drew parts of computers and accessories on the chalkboard when teaching the pupils. This, according to him, had not had the desired effects on ICT learning.

He added that "the donation of the computers is a great sign that will definitely improve the learning of ICT in the schools around here. At least, the pupils will have the privilege to see, touch and have practical lessons with visible desktop computers."

The head prefect of Pankese DA JHS, Bernard Obeng, expressed excitement for the donation of the new desktop computers. He lamented their ordeal of having to study ICT on chalkboards, which according to him made it difficult for them to understand what the teachers were putting across.

A pupil of the Pankese Roman Catholic JHS, Emmanuella Serwaa Gyan, shared the same sentiments. She added that most of them had been frustrated taking ICT lessons because they never really could understand how to use the computers even outside the class without a practical lesson.

The two pupils were confident that their performance in ICT would improve in the Basic Education Certificate Examination (BECE) with the introduction of practical lessons with the new desktops in their various schools.