Be at forefront in corruption fight - IGP charges accountants 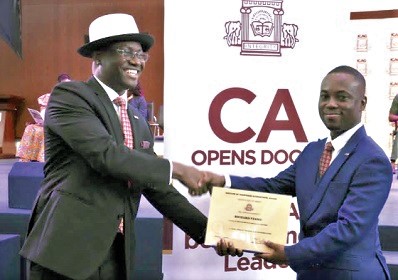 The Inspector-General of Police (IGP), Dr George Akuffo Dampare, has charged accountants to be at the forefront of the fight against financial crimes to enhance confidence in organisations.

According to him, financial crimes had become pervasive and, therefore, it was imperative for accountants, who are the managers of funds, to make it difficult for people to engage in such crimes.

This was contained in a speech read on behalf of the IGP by the Director-General of the National Protection Directorate of the Ghana Police Service, Commissioner of Police (COP) Francis Ebenezer Doku, at the 39th Graduation and Admission Ceremony of the Institute of Chartered Accountants, Ghana (ICAG) in Accra last Saturday.

The ceremony witnessed 487 people who had passed the professional examination being admitted into the ICAG as chartered accountants, with 64 others being enrolled as associate members, while 32 others graduated with post-chartered diploma in accounting.

Twenty candidates, including twin brothers — Richmond and Richard Nyame — were rewarded for excelling in their examinations.

While Richard picked up the Award for the Overall Best Candidate, Richmond was declared the Best in Financial Reporting.

The IGP, who is himself a chartered accountant, said technology had made financial crimes sophisticated, with criminals being able to engage in their nefarious activities on institutions and victims undetected.

“Modern-day accountants must not limit themselves to the theories and principles of the profession but jump at every practical learning opportunity to broaden their horizon. Attention to detail, vigilance, scrutiny, meticulousness and composure are characteristics that should never depart from you in your practice,” he said.

The President of the ICAG, Professor Williams Abayaawein Atuilik, said the large number of people admitted as chartered accountants showed that interest in the accountancy profession was high in the country.

He said the ICAG did not frustrate or deliberately fail people from becoming chartered accountants, saying that the institute only adhered to established standards.

“The standards are high and very rigorous, but if you apply yourself very diligently and do the needful, you will qualify. There is no way one can get favour in ICAG examinations. It is your knowledge and competence that will enable you to pass,” he added.

He said the accountancy profession was very crucial for development and, therefore, required the most competent and well trained people to practise.

According to the ICAG President, the institute would continue to improve on standards, in line with international best practices, to reflect the needs of society.

Prof. Atuilik further challenged chartered accountants to act in accordance with the dictates of the profession and also make integrity and ethics their hallmark in all their dealings.

“The word ‘integrity’ forms part of our motto. All of us must exhibit the highest levels of integrity. We have to be very honest and sincere and faithfully render account over resources that have been entrusted in our care,” he said.

He said the ICAG had a very strict disciplinary process and would, therefore, not hesitate to bring any chartered accountant who misconducted himself or herself to order.