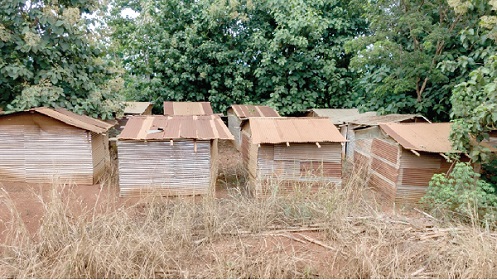 Some of the speculative structures which were hurriedly constructed after the area was declared a mining concession
30.5k Shares

Newmont Ghana has started relief payment support to over 8000 speculators who have built illegal structures on the mining company’s Ahafo North concession.

The payments paves way for the development of the $850 million mine, which was delayed because of the presence of the large speculative developers, who have invaded the field in anticipation of big compensation from Newmont after the area was declared a mining concession in 2017.

But following discussions with the Ahafo Regional Coordinating Council, the mining company paid GH¢45 million in a bid to retain the goodwill of its host communities and the speculating claimants.

Compensations for genuine landowners, whose structures and buildings were marked and coded in 2017, when the area was declared a mining concessions, are, however, yet to begin. Payment for crop compensation is also underway at the time of the visit.

The concession, which spans across five communities in the Tano North Municipality of the Ahafo Region, holds about 3.3 million ounces of gold with a 13 year lifespan.

This came to light when officials of the Ghana Chamber of Mines, accompanied by a team of media personnel with the Journalists For Business Advocacy (JBA), paid a visit to the site last Thursday.

During a visit to the project site, signs of hurriedly erected structures including fish ponds, thatched and block buildings were sighted on the company’s concessions covering the five local communities of Terchire, Afrisipakrom, Susuanso, Yamfo and Adrobaa.

As of last Friday, some 7,793 illegal structures had been validated for relief payment and GH¢23 million had been shared among 1,200 speculative land owners from the five communities.

In an interaction at Goaso, the regional capital, the Ahafo Regional Minister, George Boakye, said the establishment of an inter-agency committee to help remove the over 8,000 unauthorised speculative structures on the concession had helped to ensure peace.

“I persuaded the mining company to pay the relief support to the individuals who owned the unauthorised structures just to promote community peace and security of the Ahafo North project”, Mr Boakye said.

He warned that the Regional Coordinating Council would not tolerate any further development of unauthorised structures that would affect the company’s community relations and discourage mining investment in the country.

For his part, the Chief Executive Officer of the Ghana Chamber of Mines, Dr Sulemanu Koney, urged the newly created Ahafo Region to position itself as a mining hub in Ghana.

He said with the operations of Newmont Ghana Gold in the region, it is possible for the region to see a faster rate of development.

“We are happy at the manner in which the issue of speculative development has been resolved. This underscores the healthy relationship Newmont will have with your administration and the community as a whole”, Dr Koney said.

“Newmont is essentially going to be around for God knows many years. So it is important for the company to ensure that it has a harmonious relationship with the communities”, he added.

He said mining provides an opportunity for deep integration of the host communities with the mine and so called for a deeper collaboration so that the area could benefit from the operations of the mine.

The Youth Chairman of Terchire, one of the affected communities, Mr Richard Yeboah, in an interview with the Daily Graphic, condemned such illegal activities saying the situation had not only slowed the payment of compensation to the genuine farmers and property owners, but also the commencement of the project as well.

The Communications and External Affairs Manager of Newmont Ahafo North Project and Newmont Ahafo South Mine, Mr Samuel Osei, said though the structures on the concession were illegal, the payment was to relieve the illegal property owners of some level of financial stress and also to pave the way for the company to demolish the structures.