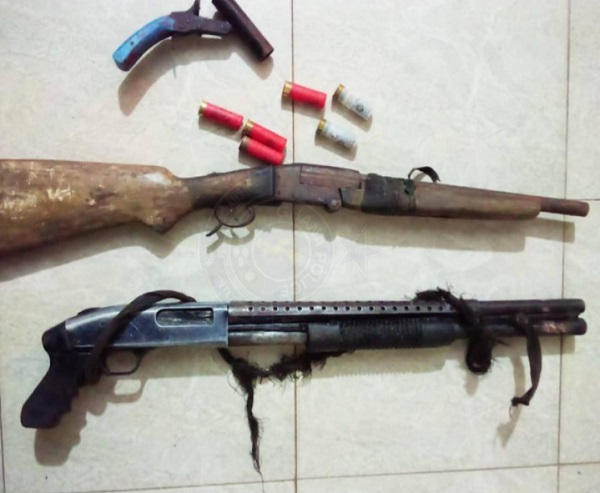 Two suspected armed robbers were gunned down by the Police on September 24, 2021, after attempting to rob a gold dealer at Manso Dawusaso in the Amansie South District of the Ashanti Region.

A press release issued by the Police said the Anti-Robbery Task Force of the Ashanti Regional Police Command in an intelligence-led operation shot the two suspected armed robbers who later died at the hospital".

Another suspect, linked to the crime, Abraham Kwasi Tetteh, was also arrested while four others are being pursued by the Police

The release said "Members of the gang forcibly invaded the residence of the gold dealer in the hours of 9 pm, disarmed the private security guard of his weapon and fired shots into the residence.

"At this stage, a Police combat team that had mounted a 24-hour surveillance on the gang, returned fire to protect the innocent lives in and around the property," the release said.

News Release: Two Robbers Shot Dead, One Arrested, Others are on the Run in the Ashanti Region

The Anti-Robbery Task Force of the Ashanti Regional Police Command in an intelligence-led operation shot two suspected armed robbers who later died at the hospital. pic.twitter.com/PfcG64bkjo

"Four of the suspects managed to escape but the two who sustained gunshot wounds were arrested and sent to the hospital but were pronounced dead on arrival".

One of the deceased robbers known as Lukeman had been granted bail by the Dunkwa Circuit Court at an earlier appearance and was scheduled to reappear on October 27, 2021, for allegedly robbing passengers on the Dunkwa- Ayanfuri highway.

The Police suspect that some of the gang members who escaped might have sustained gunshot wounds and are therefore urging the public to report anyone with a gunshot wound to the nearest Police station.

"We are therefore appealing to the public to volunteer information on anyone who is seen in or around Manso Dawusaso with noticeable gunshot wounds to the nearest Police Station," the release said.

"Meanwhile, health facilities in and around the Amansie South District are requested to immediately report the presence of any individual or group of people with gunshot wounds to the Police".

A shotgun, a pistol and a taxi cab which were retrieved from the operation have been taken into police custody.