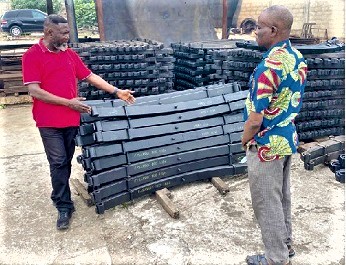 The first factory commissioned under the One District, One Factory (1D1F) initiative has doubled its production in three years.

Commissioned by President Nana Addo Dankwa Akufo-Addo in Kumasi in August 2018, Spring and Bolts — which manufactures U-bolts, leaf springs, trailer suspension parts and axles for the West African market — produced 277,220 tonnes of products in 2019, which increased to 560,615 tonnes in 2020 and 597,888 tonnes in 2021.

The Managing Director of the company, George Asamoah-Amankwaa, who made this known to the Daily Graphic last Saturday, said the company had also increased direct employment from 22 to 36, most of them skilled workers.

“With 1D1F, the government has supported us with a facility, which has gone a long way to bolster our operations,” he stated.

Trucks need durable and built-for-the-environment U-bolts, leaf springs and axles to keep them on the roads for maximum performance to cart goods across West Africa.

This is the area where Springs and Bolts is working to take full advantage of.

“Every month, at least 10 containers of our products are exported to these countries,” he said, indicating that the COVID-19 pandemic had also led to an increase in demand for its products.

Going forward, the Managing Director said, the management was making efforts to secure a facility from the African Export-Import Bank (Afriexim) to build a modern factory that would enable the company to go into mass production to take advantage of the African Continental Free Trade Area (AfCFTA).

Currently, he said, the country imported the biggest chunk of trailer suspension from China, India and Western Europe, adding that opportunities existed to cut down on imports drastically if Springs and Bolts received the Afriexim support.

“We are one of the two companies that produce U-bolts and leaf springs for the West African market and we are leaving no stone unturned to take full advantage of the AfCFTA,” he stated.

Mr Asamoah-Amankwaa stated that the 1D1F initiative, which saw the injection of capital into the operations of Springs and Bolts, enabled the company to address some of its initial challenges, including payment to creditors, which subsequently, placed it in a position to drive operations.

In spite of the strides being made, he said, the high cost of production could cut back the progress made.

“Prices of raw materials on the world market have gone up, and with the depreciation of the cedi against the dollar, our cost of production keeps going up, which has compelled some of our customers to resort to used springs, “ he said.

At the commissioning of Springs and Bolts in 2018, President Akufo-Addo had said: “The manufacture of machines, machine parts and components and the development of the automobile and vehicle assemblying industry are two of the strategic anchor initiatives being promoted by the government as part of the Industrial Transformation Plan.”

He added that Springs and Bolts was a good reflection of the potential in the two sectors.