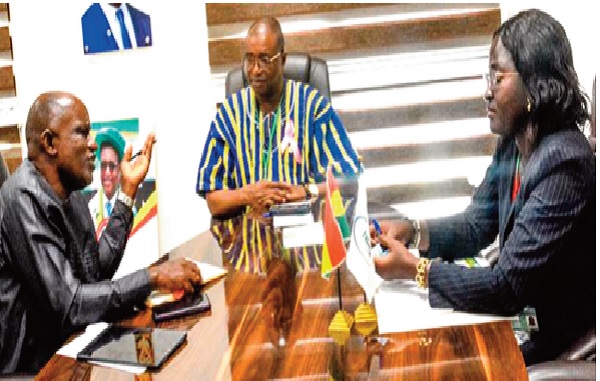 The management of the University of Environment and Sustainable Development (UESD) in Somanya in the Eastern Region has moved the university to the doorsteps of potential students.

The management visited all the senior high schools (SHS) within the Eastern Region to introduce the university to the students, explained to them what the university stands for and allowed the students to seek answers to questions bothering their minds.

The Vice-Chancellor of the university, Professor Eric Nyarko-Sampson, who disclosed this in an interview, explained, "We are doing this because people have heard there is a university in the Eastern Region, but may not have heard about who we are and what we do.

"As a Vice-Chancellor, I have visited SHSs in the Yilo and Manya Krobo municipalities, which are our immediate environs.

"We also visited all the SHSs in the Akwapim North, Akwapim South and Okere districts to present the university to them," Prof. Nyarko-Sampson explained and added that over the last two years since the establishment of the university, its staff had also visited other SHSs throughout the country.

He explained that as part of efforts by management to promote the university, "We also visited the Daily Graphic, the Ghanaian Times, Ghana Broadcasting Corporation and other media houses."

Prof. Nyarko-Sampson explained that as a community-centred institution, the university had a strong relationship with its communities and environs.

He said as part of the relation with the communities, "we have what we call the UESD community development challenge led by our Community Engagement Project and Innovations unit.

The Vice-Chancellor explained that the university realised that in dealing with waste and environmental protection issues, the young ones had always been left out.

He said that was why the university instituted the development challenge, explaining that last year, the university engaged six upper basic school pupils in the Yilo Krobo municipality to discuss what they did not like about their environment.

Prof. Nyarko Sampson explained that the pupils were given the free hand to express themselves either through drawing or in written form “and it is very interesting to see these young ones in upper primary telling us what they do not like in their community in terms of the environment”.

He explained that the challenge was designed to create in those young people, critical thinking skills, decision making and problem-solving skills.

Prof. Nyarko-Sampson explained that for the 2023 challenge, the topic would be on plastic waste and added that this year’s challenge would cover the entire Eastern Region, where each of the 10 districts would be represented by three schools