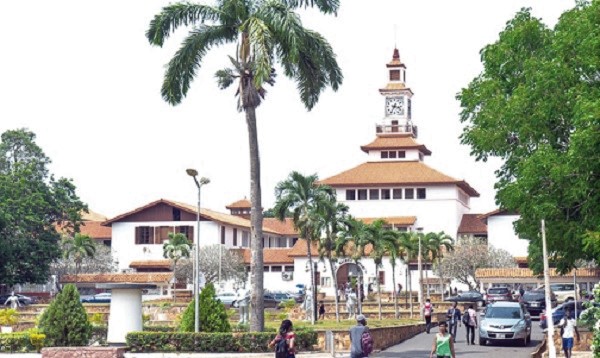 Armed policemen were Thursday (Jan 12, 2023) deployed on the campus of the University of Ghana, Legon as continuing students reported to begin the semester.

The intervention was to prevent continuing students at particularly, Commonwealth Hall, from entering the hall following their objection to being reassigned to other halls.

Reassigning the continuing students to other halls follows a new residential policy arrangement announced by the university last December, for the former to occupy other accommodation facilities provided by the university in a bid to curb clashes between students of some of the traditional halls.

Unhappy with the directive, some students of the Commonwealth Hall secured an interlocutory injunction on January 6, 2023, restraining the management of UG from implementing the residential policy.

However, the management of UG argued that the directive had taken off long before the injunction was secured, indicating that about 83 per cent of students who will not be allowed back into the traditional hall had agreed to other accommodation facilities provided by the university.

On Thursday when Graphic Online's Rosalind Amoh visited the Legon campus, police presence at the various entry points and also around the Commonwealth Hall and Mensah Sarbah Hall areas were seen.

The situation also created some nervousness among some of the freshmen who were trying to also solve their accommodation problems and were confused to see such significant police presence.

Some continuing students who had reported for school and wanted to access their traditional halls were prevented from doing so.

Those who had not paid heed to the directive to make arrangement at the reassigned halls were left stranded with their belongings.

Some students from Commonwealth Hall, usually referred to as Vandals, who spoke to Graphic Online said they did not know that directive was in place because of the injunction.

“We came here and the school’s security said they will not allow us to enter the halls, and the police are assisting them to enforce that,” a Level 300 student said.

Another also said earlier in the week, he tried to get a room at one of the diasporan halls, but he was yet to be assigned a room so he wanted to temporarily leave his belongings at Commonwealth Hall for safekeeping until he sorts his accommodation out, “but the security would not allow me.”

“It is unfortunate that the school is going against the ruling of a court. The injunction says let the status quo remain, so why would management do the contrary and then bring the police around to intimidate us,” another asked.

The University Council on December 12, 2022 decided to implement the recommendations from the Residence Board and the Academic Board regarding changes to student residence arrangements.

It said these changes were requested by Council following repeated incidences of violence involving students.

The measures which took effect from the beginning of the 2022 academic year, were to prevent future occurrences of violence.

Continuing students of Commonwealth Hall and Mensah Sarbah Hall are not returning to these halls, or to any of the traditional halls.

Rather, they have randomly been assigned to available rooms in any of the UGEL and private hostels.

Continuing female students of Mensah Sarbah Hall and students with special needs in both halls are exempted by this measure.

Also from the 2022/2023 academic year, only Level 100 and graduate students (Masters and PhD level) will be assigned to Mensah Sarbah and Commonwealth Halls and subsequently, undergraduate students will vacate the halls at the end of Level 100 and could secure accommodation in the private hostels from Level 200 until completion.

For Level 100 students who opt for traditional halls, they will be randomly assigned to the halls and progressively, all the traditional halls (Mensah Sarbah, Commonwealth, Volta, Legon and Akuafo halls) will be reserved for Level 100 and graduate students only, culminating into a full in-out-out-out policy by 2025/2026.

To improve upon security on campus, the university council said it was installing CCTV cameras and Electronic Access control systems in all halls.