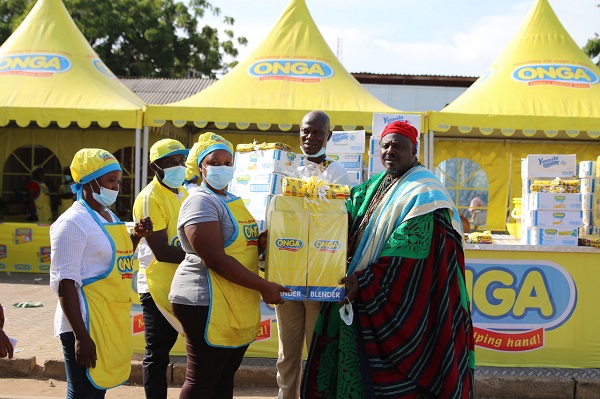 Representatives of the Tema Station Market Women Association have emerged as the winners of the 2021 edition of the Onga Kpatashie Cook-Off.

The competition saw 12 Market Women Associations in the Greater Accra Region battle it out for culinary supremacy at the four courts of the Centre for the National Culture in Accra.

The Tema Station Market walked away with the bragging rights as the winners of this year’s competition. They were presented with two frost freezers and other product packages for each contestant.

Speaking at an award presentation ceremony, Assistant Brand Manager, Sandra Anoff, congratulated all contestants for the success of the 7th edition of the Onga Kpatatshie Cook-Off.

She also took the opportunity to thank the market women for the warm reception the event has received over the years.

“I would like to assure you of our commitment to continually support this event as it offers the opportunity to engage the very people who are carrying the brand on their shoulders, the market women," she said.

“Beyond the brand engagement is also the market women also have some time to socialise and casual interact with each other".

On her part, the Executive Director of the National Commission on Culture, Janet Edna Nyame reemphasised the need to promote the food culture of the country.

She also encouraged the audience to eat, drink and wear made in Ghana products.

Onga Kaptashie, is a cooking competition organised by the Center for National Culture for major market women associations in the Greater Region. Over the years the event has been organised in partnership with Onga.