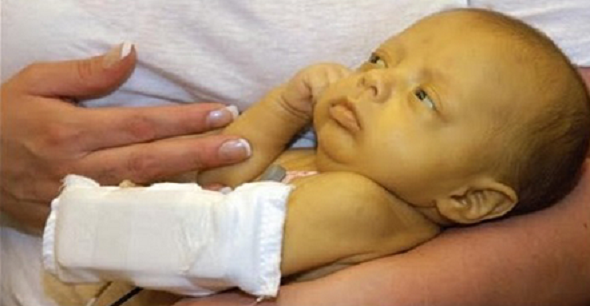 A baby with jaundice

Jaundice is a condition that gives the eyes and skins a yellow colour and when it affects children below one month old, it is known as neonatal jaundice.

Neonatal jaundice has been described as the most significant and preventable cause of cerebral palsy among Ghanaian children.

Evidence from the Ghana Health Service (GHS) shows that the incidence of neonatal jaundice among newborns has been on the rise in recent years.

Health experts say that although a few cases of jaundice in newborns are normal, it only takes medical assessment to determine if a baby is okay or otherwise.

Newborn jaundice is very common and can occur when babies have a high level of bilirubin, a yellow pigment produced during normal breakdown of red blood cells.

Bilirubin is a yellowish substance in a person’s blood and forms after red blood cells break down and it travels through one’s liver, gallbladder and digestive tract before being excreted.

Sometimes the level of bilirubin can become very high and this becomes dangerous to the baby.

The good news is that in most cases, newborn jaundice goes away on its own within two to three weeks as a baby’s liver develops and as the baby begins to breastfeed frequently, which helps bilirubin pass through the body.

However, high levels of bilirubin can put a baby at risk for deafness, cerebral palsy, or other forms of brain damage.

The  Director of the Family Health Division of the Ghana Health Service, Dr Isabella Sagoe-Moses, advocates that although prevention was not always possible, early detection and treatment of jaundice in babies were critical to saving newborn babies from death and the dire permanent consequences of jaundice such as cerebral palsy and other disabilities.

“If the treatment of jaundice is delayed, even for a few hours, the condition can spread and this can make the baby develop brain damage, which is irreversible,” she said.

She attributed the high neonatal jaundice cases and complications to the negative socio-cultural practices that prevented mothers from seeking medical intervention or doing so on time.

Dr Sagoe-Moses mentioned the cultural practices to include exposing the babies to the early morning sun and spilling breast milk on the eye when symptoms begin to show rather than seeking immediate health care in an approved facility.

She said none of the cultural interventions was helpful and asked mothers and care givers to seek immediate medical intervention to save affected babies from the dire consequences of jaundice in babies.

“Jaundice in babies is a medical condition. Do not waste time and do not expose your baby to sunlight. Do not give your baby glucose water or treat your baby with other home remedies. Every minute counts. Seek medical advice immediately.

“Jaundice usually appears on the third or fourth day of life but disappears after the first week, especially because newborn babies have a large number of red blood cells, which are quickly broken down.

“This leads to the release of Bilirubin into the blood and that is then cleared away by the liver. In newborn babies, the liver is still immature and is not able to handle the large amounts of bilirubin very well.

Babies are also more likely to develop jaundice if they are not breastfeeding well and so it is important that mothers are encouraged to breastfeed their new babies as much as they are able to take,” she advised.

She mentioned blood group incompatibility (Rhesus or ABO) as another risk factor.

“This means that there is a difference between the blood group of mother and baby, which can sometimes lead to jaundice in the baby.

“G6PD deficiency is another risk factor. G6PD is a chemical that is normally present in red blood cells in a certain quantity. This provides energy to the red blood cells. Some babies (much more common in boys) are born with reduced amounts of this chemical or it may be totally absent.

Exposure to substances like camphor or drugs containing sulphur can trigger jaundice in such babies.

“Parents who use camphor, otherwise known as naphthalene balls, to provide nice fragrance in their babies’ clothes, as well as keep insects away, might be exposing their children to jaundice. Additionally, babies born before nine months of pregnancy are also vulnerable to jaundice,” she said.

As a Child Health Specialist with several years of experience working as a clinician and later at the national policy level of the Ghana Health Sector, Dr Sagoe-Moses called on mothers with new babies to frequently do visual inspection of babies’ eyes and skin under natural light to pick on time any yellow colouration of eyes and skin.

“Babies who are kept indoors, especially in dark rooms, are more likely to have jaundice that is not detected early enough. It is advisable that you examine your baby in good bright light every morning so that any jaundice can be recognised early,” she advised.

Other warning signs she gave included the likelihood of baby’s stool becoming pale, almost white, which she said could be an indication that a baby might be suffering from jaundice.

Dr Sagoe-Moses said the best way to reduce the incidence of infant jaundice was to ensure babies were well-fed eight to 12 times a day for the first week of their lives.

In addition, parents, especially nursing mothers, must carefully observe their babies within the first five days for symptoms such as yellowing of the skin and eyes and report to the hospital immediately for treatment if any of the symptoms is noticed.

It is observed that regular antenatal clinics visit by pregnant women for blood tests such as glucose-6-phosphate dehydrogenase (G6PD), hepatitis, blood type and early initiation of breast feeding could help prevent neonatal jaundice.