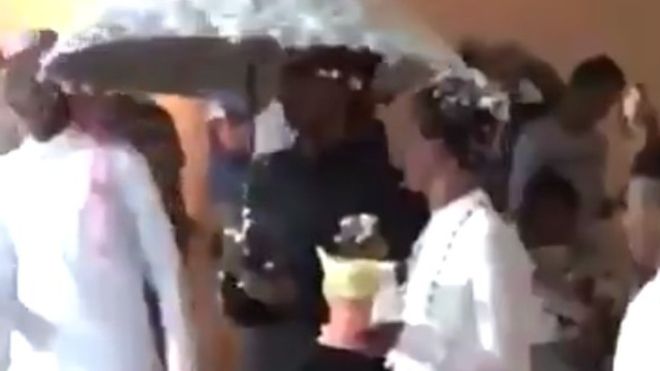 Police said the incident had "surprised" people at a festival in a Mecca resort
30.5k Shares

Police in Saudi Arabia say they have arrested several young men who last week appeared in a video of what was described as a "gay wedding scene".

In the video, the men are sprayed with confetti as they walk side by side on a carpet at an outdoor venue. One of them seems to be wearing a long bridal veil.

On Monday night, Mecca Police said they had identified "the cross-dresser and other people involved in the incident".

They had been arrested and their case referred to prosecutors, it added.

The force did not name the men or say what charges they faced.

Saudi Arabia has no written laws concerning sexual orientation or gender identity, but judges use principles of Islamic law to sanction people suspected of extra-marital sexual relations, homosexual sex or other "immoral" acts, according to US-based Human Rights Watch.

The Mecca Police said the "gay wedding scene" had taken place on Friday during a festival at a resort in the holy city and had "surprised" people there.

In February 2017, Saudi police arrested 35 Pakistani citizens, some of whom were transgender women.

One of them, who was known as Meeno Baji, died in detention. Her family said her body bore signs of torture, but officials said she had died of a heart attack.