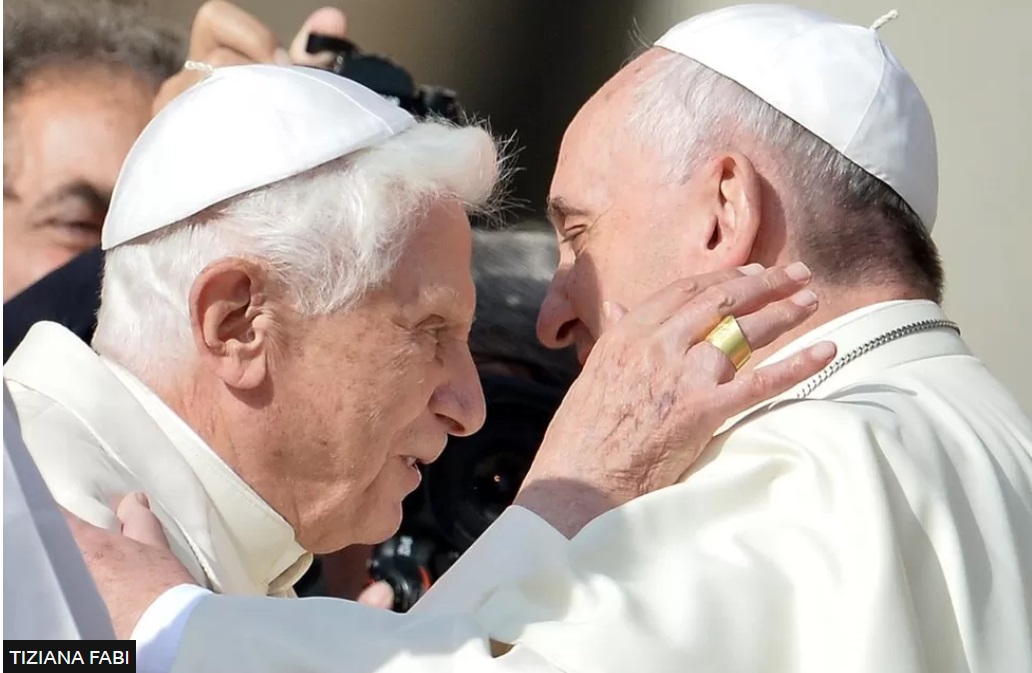 Pope Francis will preside over the Funeral Mass for Pope Emeritus Benedict XVI in St. Peter’s Square on Thursday, The Vatican has said.
30.5k Shares

Pope Francis will preside over the Funeral Mass for Pope Emeritus Benedict XVI in St. Peter’s Square on Thursday, The Vatican has said.

It will be an unprecedented event in which a current pope will celebrate the funeral for a former one.

In an update from the Director of The Vatican Press office on the death of Benedict XVI, it was explained that the body will be laid in St. Peter’s Basilica, Vatican for viewing of the Faithful on Monday, January 2, 2023.

On Thursday, January 5, 2023, the funeral mass will be held at St. Peter's Square, Vatican at 9:30am to be presided over by Pope Francis.

Benedict: The Pope who resigned from the papacy

Benedict XVI was already 78 when he became Pope in 2005. Age and ill health quickly took their toll, prompting his resignation less than eight years later.

No other pope had stepped down since Gregory XII in 1415 and Benedict was the first to do so voluntarily since Celestine V in 1294.

When he became 265th Pontiff of the Roman Catholic Church it was the culmination of the rapid, and highly controversial, rise of Joseph Ratzinger.

Supporters portrayed him as a highly intellectual man who laboured to protect the spiritual inheritance bequeathed to him by Pope John Paul II.

To his critics he was the ultimate exponent and guardian of the Church's dogmatic approach to issues like abortion and contraception. The outrage he sometimes caused seemed typical of a man who was never afraid of upsetting people - if he believed something had to be said or done.

Joseph Aloysius Ratzinger was born into a profoundly Catholic family on 16 April 1927, in the southern German state of Bavaria. He was the son of a police officer with, as he later put it, "simple country roots".

His youth was indelibly marked by World War Two. Forced to join the Hitler Youth, he served in an anti-aircraft unit which defended a BMW plant outside Munich.

Later he dug anti-tank trenches before deserting in the dying days of the war. "In three days of marching, we hiked down the empty highway, in a column that gradually became endless," Ratzinger recalled.

"The American soldiers photographed us, the young ones, most of all, in order to take home souvenirs of the defeated army and its desolate personnel."

From 1946 to 1951, he studied philosophy and theology at Munich University. And, in June 1951, together with his brother Georg, he was ordained a priest.

After completing a doctorate in theology, Father Ratzinger, as he was, became a university professor, teaching dogma and fundamental theology at a number of places, including Freising, Bonn and Munster.

At the time, Ratzinger was a champion of the reformist liberal agenda that drove the Second Vatican Council. Indeed, after taking up a post at Tübingen University, in southern Germany, in 1966, he became a close friend of the leading liberal theologian, Hans Küng.

Küng, who brought Ratzinger to Tübingen, would later be barred from teaching by his former colleague, after he rejected papal infallibility.

And, when 1,360 prominent and radical theologians signed a famous statement in 1968 asserting their freedom to explore the faith, he was among them. The group rejected the Vatican's dominance arguing that Catholics should have the freedom to question the decisions of the Roman Curia - the Vatican departments that help run the Church.

It was the political upheavals of 1968 that led to a dramatic change in Joseph Ratzinger's theological outlook. Student protests, mirroring those in the United States and Paris, broke out in Tübingen: literature branding the Cross as "a sadomasochistic artefact" appeared throughout the university and lectures were disrupted by tomato-throwing radicals.

Profoundly shocked by this outbreak of radical theology, which he characterised as "brutal", Ratzinger left Tübingen for the more conservative University of Regensburg.

As his former assistant, Wolfgang Beinert, puts it: "Ratzinger believed that he was in some way responsible, guilty of the chaos, and that the university and society and church were collapsing."

From that point on, Joseph Ratzinger no longer entertained any thoughts of reforming the Church, of breaking down its rigid hierarchical structure and of encouraging collegiality between the Vatican and Catholic bishops.

Instead, he became an enthusiastic advocate of orthodoxy and continuity, a firm bulwark against dissent in what he considered to be an increasingly disjointed and permissive world.

Joseph Ratzinger became a prime candidate for rapid advancement and it was no surprise when his ideological soul-mate Pope Paul VI appointed him Archbishop of Munich, and then cardinal, in 1977.

The call to Rome was not long in coming. In 1981, Pope John Paul II appointed Ratzinger as prefect of the Vatican's office to protect the purity of Church theology - once known as the notorious Holy Inquisition.

Ratzinger had criticised the Congregation for the Doctrine of the Faith as "an all too smoothly functioning [body] which prejudged every question almost before it had come up for discussion".

But he took to his work with typically energetic enthusiasm.

During the 1980s, he spearheaded the Church's campaign against "liberation theology", a potent blend of Catholicism and Marxism particularly popular in Latin America.

He also took an uncompromising line within the Roman Catholic church. As theological enforcer for Pope John Paul, he had called priests and academics to Rome to explain themselves before requiring them to sign repudiations of their thinking.

Others would be "silenced" or even excommunicated. Liberals were appalled, soon nicknaming him the "Panzerkardinal", while conservatives viewed Ratzinger's actions with approval.

Later, he would attack what he saw as "religious relativism", the belief that no one faith can claim to be the sole vessel of truth or to represent the world's only saviour.

In 2000, he published Domine Iesus (The Lord Jesus), a controversial document that stated, in no uncertain terms, the Roman Catholic Church's view that it was the one true Christian denomination, and that all others were "deficient".