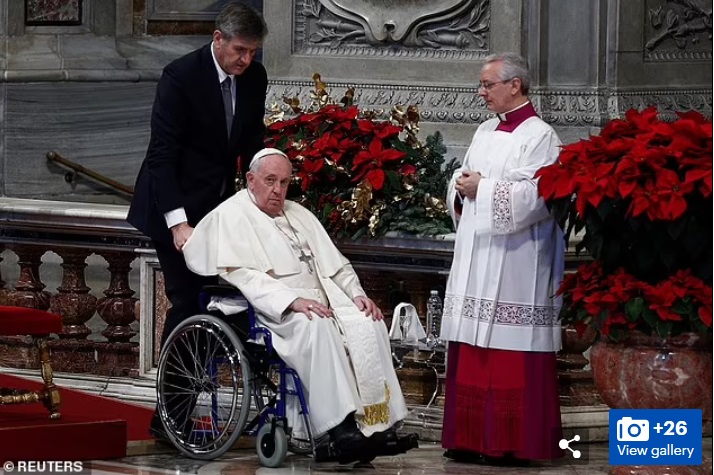 Catholics on Sunday started gathering in Saint Peter's Square to see Pope Benedict XVI lying in state as thousands prepare to say goodbye after ailing Pope Francis, 86, prayed for his predecessor's passage to heaven in special New Year's Day Mass at the Vatican.

The pontiff looked weary, arriving in a wheelchair to St Peter's Basilica Sunday 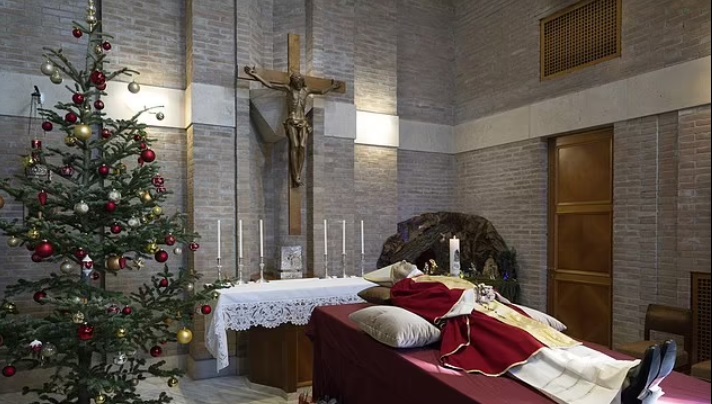 Crowds of Catholics gathered in Saint Peter's Square in the Vatican tonight as they prepare to say goodbye to Pope Benedict XVI.

Benedict, the first pope in 600 years to resign from the role, died in the Mater Ecclesiae Monastery in the Vatican at 9.34am on Saturday and will be lying in state for mourners to pay their respects from Monday.

It comes after Pope Francis prayed for his predecessor's passage to heaven as he presided over a special New Year's Day Mass in St Peter's Basilica on Sunday.

The huge basilica will host Benedict's coffin from Monday, and thousands of faithful are expected to attend the first of three days of viewing.

The former pope's body has been dressed in a mitre, the headgear of a bishop, and a red cloak-like vestment in preparation. A rosary was placed in his hand. 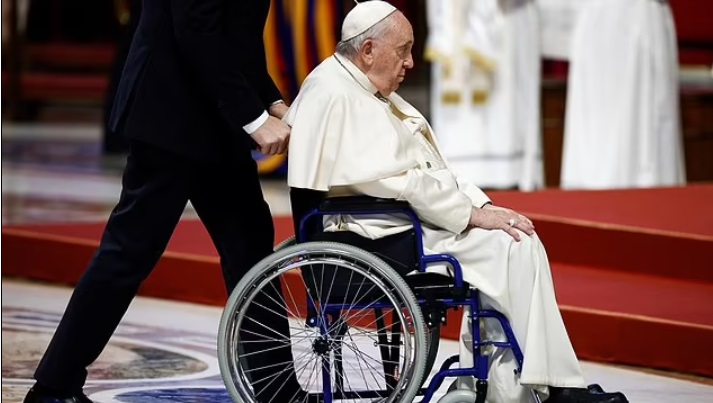 Francis, who looked weary after arriving to St Peter's Basilica in a wheelchair this morning, will lead Benedict's funeral on Thursday in St Peter's Square where mourners gathered today.

The pontiff departed from his written homily this morning to pray aloud for Benedict, imploring the Virgin Mary to 'accompany him in his passage to the hands' of God.

Benedict's funeral will be a simple one, the Vatican has said, in keeping with the wishes of the former pope, who for decades as a German cardinal had served as the Church's guardian of doctrinal orthodoxy before he was elected pope in 2005.

An array of world leaders honoured Benedict's legacy, with King Charles expressing his 'deep sadness' at his death in a message to Francis, as the head of the Roman Catholic Church in England and Wales, Cardinal Vincent Nichols, and the Archbishop of Canterbury, Justin Welby, also paid tribute.

US president Joe Biden called Benedict an 'inspiration to all' and 'a renowned theologian, with a lifetime of devotion to the Church, guided by his principles and faith'.

Meanwhile, a spokesperson for the Catholic Bishops' Conference of England and Wales confirmed that Catholics up and down the UK will be praying for Benedict on Sunday.

Its general secretary, the Reverend Canon Chris Thomas, said: 'We encourage Catholics in England and Wales to keep Pope Emeritus Benedict XVI in their prayers.'

Benedict became the second pontiff in history to visit the UK in 2010 when he met the Queen and made a historic address at Westminster Hall.

From Monday, his body will be in Saint Peter's Basilica so the worshippers can pay their respects.

Speaking on Saturday, the head of the Roman Catholic Church in England and Wales, Cardinal Vincent Nichols, said he wants Catholic churches in the UK to 'echo the funeral Mass' with their own ceremonies on Thursday.

Offering words of comfort to UK Catholics, he added: 'We draw strength and comfort from our faith when anybody dies and when it's the pope that dies it's the same story, it's the same prayers.

'We commend them to God and we thank God for the great gifts of their life and especially of his life.'

He added: 'I was consoled by a comment I heard that somebody had made in Rome a couple of days ago, where they put it rather beautifully – they said, 'The angels are gathering, they're coming to take him home'.'

In a statement, Charles paid tribute to Benedict and recalled visiting him at the Vatican in 2009.

'I also recall his constant efforts to promote peace and goodwill to all people, and to strengthen the relationship between the global Anglican Communion and the Roman Catholic Church.' 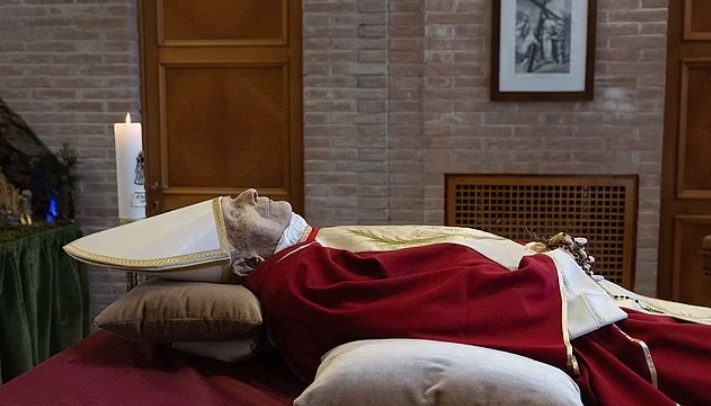