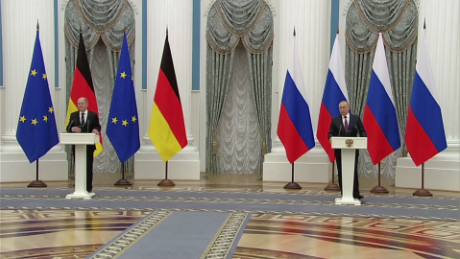 Vladimir Putin and Olaf Scholz speak at a joint press conference in Moscow on February 15, before Russia's invasion of Ukraine had started.
30.5k Shares

Finland, a country that shares an 830-mile-long border with Russia, announced this week that it is to halve its cap on the number of visa applications from Russian citizens.

Currently, 1,000 Russians can apply for Finnish visas each day, but as of September 1 that number will drop to 500. Jussi Tanner, director general for consular services at Finland's Ministry of Foreign Affairs, told CNN that a maximum of 20% of those slots will be allocated for tourist visas, meaning no more than 100 tourist visas will be available per day.

The move comes after Estonia, another European Union nation that borders Russia, banned even Russians who already had visas from entering the country. According to Reuters, that amounts to 50,000 people.

The Czech Republic and Latvia have also been supportive of visa bans and have also taken measures to restrict Russians from traveling into the EU.

The proposal was first floated by Ukrainian President Volodymyr Zelensky, who wants to stop Russians from entering the bloc, where they can then travel freely for 90 days in the EU's common travel zone, the Schengen area.

Not everyone agrees. German Chancellor Olaf Scholz says that while it is important to sanction those in Russian President Vladimir Putin's inner circle, Europeans need to "also understand that there are a lot of people fleeing from Russia because they disagree with the Russian regime."

A senior German diplomat told CNN that Scholz's argument is not based in fact, "as anyone can apply for a humanitarian visa." The diplomat believes that Scholz is mostly attempting to "balance his own party which is split between those who want dialogue with Russia and those who want to appear hard."

Advocates of limiting Russian visas believe the argument is quite clear.

Alexander Stubb, a former Finnish Prime Minister and foreign minister who had previously advocated for visa liberalization with Russia, told CNN: "It's a sad state of affairs, but the price of war has to be felt by Russian citizens."

He said that "the only way in which the hearts and the minds of the Russian people can be changed is for them to understand what Putin is doing is a blatant violation of international law. That means a total visa ban on Russians."

Rasa Juknevičienė, a former Lithuanian defense minister and current member of the European Parliament, says that "first and foremost, this is a security issue."

"Russian citizens travel to the EU mainly via Finland and Estonia. The official services of the countries are under enormous pressure. Russia is controlled by KGB legacy structures, which exploit the openness of the Schengen countries for various operations," Juknevičienė told CNN.

It's unlikely that European leaders will reach a full agreement on this issue. While the EU has been largely united since the start of the war and has come together to place serious economic sanctions on Russia, there is a geographical reality that complicates any consensus between 27 countries with vastly different economic and political priorities.

Countries in the west and south of the EU, who are somewhat protected from Kremlin aggression due to sheer distance, are quick to remind hawks that Russia is a very large part of the wider region of Europe.

It is therefore not only extremely difficult, but probably not particularly productive, to simply ignore Russia. Once the war is over, European economies will want to re-establish ties with Russia. Not only is this beneficial to those countries, but it could also prove valuable in a post-conflict propaganda war to convince average Russians of the benefits of European values.

Strategically, most serious figures also agree that any post-war European security plans will have to involve Russia, and it's far better that Moscow is proactively involved and working with its European neighbours.

At the other end of the spectrum, there are those countries such as Poland, Estonia, Lithuania and Latvia who have already suffered at the hands of Russia quite a lot, both at the hands of the oppressive dictatorship of the Soviet Union and more recently from the threat of Putin's Kremlin.

These are the competing factors that make handling Putin and Russia so complicated.

Will the EU work with Putin if he remains in power after the war? If not, how different must the regime that follows be from Putin's to satisfy the bloc? What would need to be included in a hypothetical treaty to assure different European leaders that Russia will not provoke further conflict? What might the EU be willing to concede in order to broker a peace? It's worth remembering throughout all of this that Ukraine is now a candidate for EU membership.

All of these big questions create smaller questions, including what should be done during the conflict on visas. And the longer the war goes on, as the West's options for sanctions and retaliation become increasingly limited, the more of these questions will emerge.

The hard reality is that these smaller questions, headaches in themselves, must be balanced against whatever is the best-case, long-term outcome of this bleak period. And the blunt truth is that one thing will never change: Europe cannot simply ignore Russia.