Plantain festival - may it remain so each year 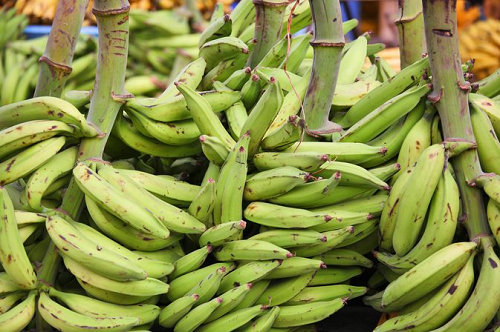 A Plantain Festival has come to pass for the people of Agogo in the Ashanti Region.  The Traditional Council, led by the Omanhene, Nana Kwame Akuoko Sarpong last Sunday introduced a novelty dubbed - Golden Plantain Festival - to showcase their agricultural pride.

So, just as we have a Yam Festival, the people of Agogo have proved to Ghana that working towards abundance and having a Plantain Festival is a can do.  And what better time to show this than in this era of Planting for Food and Jobs.

Plantain, according to the Omanhene, has become the “gold of Agogo”.  Planting of the crop was introduced in the 1960s after the fortunes of cocoa, the then active crop in the area, dwindled following a series of destructive fire outbreaks which also damaged the land.  Plantain, alongside some other young plants was introduced at some point primarily to help rejuvenate the destroyed land.

Nearly six decades on, plantain farming has become the mainstay of the people of Agogo.  It is believed to have and continues to offer employment opportunities to the youth who otherwise would have trooped to the cities in search of non-existing jobs.  The festival therefore is not only to make a show of the pride of the traditional area but also to celebrate the illustrious plantain farmers in the area for their hard work.

It is absolutely encouraging to note that plantain produced in Agogo has become an exportable item to neighbouring Burkina Faso, Benin, La Cote D’Ivoire, Togo and Mali. Not too long ago, Ghana was importing the same commodity from some of these countries.  If the tables have today turned in favour of Ghana, we need to acknowledge same and build on the tireless efforts of the people who have made it so.

There are a few areas in the country with examples of turn-around farm produce worth identifying and celebrated.  What the Agogo Taditional Council has done is worth emulation by those other Traditional Councils who have seen such good work by their farmers.

Interestingly, the three day Agogo Golden Plantain Festival, as reported in the October 6 issue of the Daily Graphic, was combined with a grand durbar which was attended by Ghanaians from all walks of life.  This is potentially a good attraction for local tourism in the area.  It is for the Tourism Development Authority to grab it, capitalise on it and promote for the future.

Plantain, green, semi-ripe or ripe, could be used for a variety of foods including delicious snacks such as roasted plantain, kelewele, ofam and plantain chips.  A good variety of plantain dishes are not quite well known and how good it would be for the hospitality industry to point them out to us during the festival period.  Also, as a build up to the festival, restaurants and hotels in the area could take a week to wet appetites with adverts on a variety of plantain dishes as they introduce guests to some novelty dishes unknown at family tables.

Small initiatives usually attract big minds to help grow many more opportunities.  And so it is not surprising that as reported by the Daily Graphic of October 6, a Deputy Minister of Agriculture, Mr. George Oduro, announced at the Festival that plans by the Government, “Were far advanced to construct a $200,000 plantain processing factory in Agogo as part of the Government’s One-district, One-factory (1D1F) policy”.  He explained that the project would be in partnership with the private sector and was aimed at creating employment opportunities.

Another help has also beckoned the Asante Akyem North District.  The District has apparently been selected to benefit from a Canada-sponsored Agricultural programme.  This is a career development training dubbed, “Modernising Agriculture in Ghana” (MAG) and it would be targeted at some selected farmers in the area.

If casual planting of plantain almost sixty years ago could put Agogo on the radial with positive dimensions stepping out of the good leadership of its traditional Council, then many more traditional Councils and District Assemblies could learn from the example of Agogo taking into account food crops such as sweet potatoes and corn, for example.

The days for sweet potato crisps and corn flakes factories are not too far from some of our districts.  1D1F is beckoning at many more Districts.