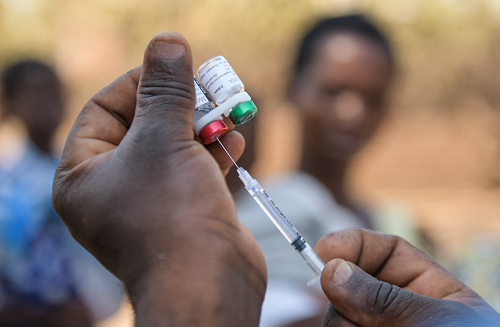 At a time when mankind is clutching desperately at a vaccine to survive COVID-19, a vaccine has emerged to save the most vulnerable from another ruthless killer, malaria.

The RTS,S vaccine (Mosquirix) by GlaxoSmithKline Biologicals and Walter Reed Army Institute of Research, which has been in development for about 35 years, is finally approved for children, to help prevent malaria and limit disease severity.

Interestingly, the invention of the RTS,S malaria vaccine had something to do with Hepatitis, another ruthless killer disease.

The beneficiaries of the vaccine have Joe Cohen and his co-inventor to thank, for fusing the hepatitis surface antigen and the protein that coats the surface of the malaria parasite - Circum-sporozoite Protein (CSP).

In 1987, GSK asked Dr Cohen to take over the leadership of the malaria vaccine project.

“Our work on RTS,S built upon the pioneering research by Dr Ruth Nussenzweig and Dr Victor Nussenzweig, at New York University. They identified the CSP as a likely protein candidate for a malaria vaccine,” he said.

Dr Cohen, co-inventor and patent holder of the RTS,S/AS02A malaria vaccine, proposed this to the GlaxoSmithKline (GSK) team.

“The process started at GSK in my laboratory between 1987 and 1989,” he recalled. Sharing his joy on the success of the vaccine with AMMREN reporter, Carlton Cofie.

Dr Cohen explained that they combined the RTS,S protein with the novel Adjuvant Systems (ASs) developed by his colleagues at GSK.

“This helped optimise the immunogenicity of the antigen. Two of these RTS,S/AS combinations proved to be efficacious in clinical trials conducted on adult volunteers in the USA and Africa and young children and infants in various studies conducted throughout sub-Saharan Africa.”

The RTS,S journeyed far from Europe to Africa and had for 12 years been in clinical development on the continent of Africa.

“For more than 10 years we partnered leading African scientists, technicians, nurses and field workers. They became our key partners in conducting multiple clinical trials in Africa,” he explained.

The Malaria Clinical Trials Alliance (MCTA) was established in 2006 by the INDEPTH Network, deploying researchers in seven countries and eleven centres in Africa, including the Kintampo Health Research Centre and the Kumasi Centre for Collaborative Research/ Kwame Nkrumah University of Science abd Technology (KNUST) School of Medical Sciences.

Personnel and facilities at the research sites in Burkina Faso, Gabon, Ghana, Kenya, Malawi, Mozambique and Tanzania were upgraded for the trials.

The project funded by Bill and Melinda Gates Foundation, brought together the MCTA, Malaria Vaccine Initiative (MVI) and the Medicines for Malaria Venture (MMV) for the stage III clinical trials.

The MCTA gave birth to the African Media and Malaria Research Network (AMMREN) to provide reports on the clinical trials of the vaccine, as well as feedback from the communities.

Having visited all the eleven RTS,S vaccine trial sites in seven African countries and provided extensive coverage on the study, AMMREN joins the scientific world to celebrate the approval of the malaria vaccine candidate.

n December the Global Alliance for Vaccines and Immunisations (GAVI) will decide how much to invest in RTS,S, having already committed nearly $70 million to the WHO pilot programme of RTS,S that has administered 2.3 million doses so far.

GSK has announced its commitment to supplying 15 million doses of RTS,S each year, depending on funding, and selling the vaccines at no more than five per cent higher than the cost of production.

The vaccine is administered in a four-dose regimen: three shots in three months, beginning at five months of age, and a fourth booster shot at roughly 18 months old.

However, the fourth booster’s necessity is still being evaluated.

Dr Cohen is looking forward to the early implementation of the malaria vaccine to save lives.

“I am anxiously awaiting the deployment on the ground. I sincerely hope that all stakeholders will collaborate closely to ensure that this vaccine reaches those who need it most, as quickly as possible.”

The mystery around the spending of public funds must stop. It is crucial to have transparency in the acquisition, distribution and availability of vaccines to help restore public faith in the deployment of the vaccine.

The public must demand the right to information about the name of the contractor, manufacturer, total number of vaccines contracted, the contract value, as well as the delivery schedule.

The writer is Editor, Eyes on Malaria magazine, AMMREN. E-mail: This email address is being protected from spambots. You need JavaScript enabled to view it.