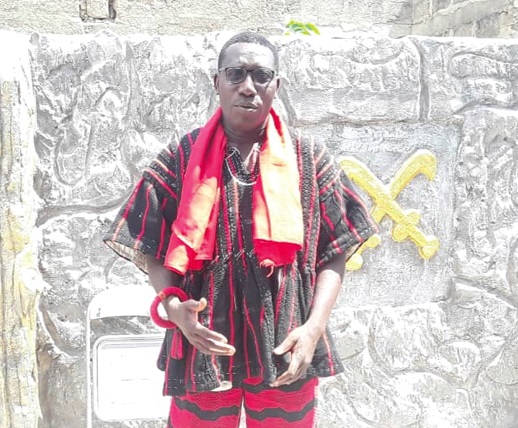 Anytime the word “Kalabule" is mentioned, what perhaps readily comes into people's minds is fraud.

It has also been interpreted as engaging in unethical business practice.

It is said that the word was a commercial jargon understood by border guards and traders in general at checkpoints. Kari ka buude gradually gained popularity, but it is said that it eventually changed to what is now known as “Kalabule".

Along the Weija-Kasoa-Cape Coast highway lies a town popularly called Kalabule. But that is not its real name because some traditional authorities in Ngleshie Amanfro in the Ga South municipality of the Greater Accra Region say “no well-meaning chief will ever refer to the town as Kalabule.”

According to them, chiefs in the area would rather call the community Ngleshie Amanfro Mataheko or simply, Mataheko. They, however, said that they were not referring to the Mataheko located in the Kaneshie area.

So why was the area referred to as Kalabule? Currently, the name seems almost impossible to change from Kalabule to Ngleshie Amanfro Mataheko. Indeed, some signages and billboards by the roadside along the main Weija-Kasoa-Cape Coast road, around the taxi rank and bus stop around the town's junction all have Kalabule inscribed on them but spelt differently.

No matter how rightly or wrongly it is spelt on the various signages, it still in one way or the other reads Kalabule.

Speaking to the Daily Graphic on the issue at the Ngleshie Amanfro Palace, the Djaase (installer of chiefs) of Ngleshie Amanfro Mataheko, Nii Kwashie Shiatse, said chiefs in the area had been deliberating on the matter for years now.

According to him, people started calling the town Kalabule in the 1980s when allegedly, “some police personnel took advantage of the bushy nature of the place and the small hill between the tollbooth area and the town to mount checkpoints to check vehicle documents and other road safety issues; drivers who flouted some road traffic regulations were then asked to pay fines.”

Nii Shiatse, who spoke Ga, explained that “when you are driving from the tollbooth area and Weija towards Kasoa and Cape Coast, there is a small hill one has to climb; when you are also driving from the opposite direction, that is from Cape Coast towards Kasoa, before you reach the town, there is a curve and so drivers were not able to see ahead of them to know whether or not the police were on the road checking documents; hence they tried finding out from their colleagues before getting to the checkpoint."

The Djaase revealed that it was the drivers who referred to the police as “Kalabule people"; hence people started calling the area Kalabule when indeed it was Ngleshie Amanfro Mataheko.

Nii Shiatse noted that the drivers who had already gone through the checkpoint then informed their colleagues to “prepare very well before meeting the Kalabule people on the road.”

The Djaase who is also the Assembly member for the Ngleshie Amanfro Electoral Area, said that was how the name started but he further pointed out that “in the archives there is nowhere that the name Kalabule is written; you will rather see or read Ngleshie Amanfro Mataheko or if it’s too long to pronounce then simply say, Mataheko”.

He explained that traditional rulers were, therefore, considering raising money to mount a huge signage by the main Weija-Kasoa-Cape Coast highway just before you branch into the town with its real name Ngleshie Amanfro Mataheko boldly written on it for all to see and comply with.

A taxi driver in the area, Mr Joseph Ayiquaye, acknowledged that the name given to the town was not right and so anytime he had the opportunity he rather called the town, New Mataheko instead of Kalabule, because he was aware there was another town called Mataheko near Kaneshie.

However, when Nii Shiatse was reached for his comments again, he stated that to call it New Mataheko was also wrong; rather it should be referred to as Ngleshie Amanfro Mataheko as he indicated earlier.

He observed that historically, Ngleshie Amanfro Mataheko existed before Kaneshie Mataheko and so calling the town New Mataheko was also incorrect.

Another resident and Secretary to the Chief of Ngleshie Amanfro Mataheko, Mr Solomon Johnson Tetteh, who has lived in the community for the past 33 years, said: “Initially I didn't like the name Kalabule and so I was always having misunderstandings with trotro conductors or mates who also insisted on calling the town Kalabule; I disliked that name."

Mr Tetteh observed that to avoid any misunderstanding with the trotro conductors he resolved that anytime he got to his destination, he would simply tell the conductors, “Mate I will get down here at the bus stop."

He recalled that many years ago there was a football match between Russia Sukura and Amanfro and so the two competing teams decided to go for lunch at Ngleshie Amanfro Mataheko and returned to Russia Sukura where the match was played.

The secretary said as soon as he got to the bus stop at Ngleshie Amanfro Mataheko, out of excitement and because of the presence of his colleagues, he mistakenly told the trotro conductor that they (the team) would alight at “Kalabule junction”.

He said indeed that day was a very sad one for him (Mr Tetteh) because his colleagues started teasing and calling him “Kalabule man”.

“Even when I am playing football with my colleagues they will shout at me and say hey Kalabule man pass the ball to me let me score a goal; I fought this name for several years before succeeding,” Mr Tetteh said.

He gave another scenario where he was travelling in a commercial vehicle from Mankessim in the Central Region to Ngleshie Amanfro Mataheko and when he informed the conductor that he would alight at Kalabule, the passengers who heard him all turned and looked at him with contempt.

Mr Tetteh indicated that some of the passengers including an old man in the vehicle asked him whether he (Mr Tetteh) understood what he was talking about.

Other passengers teased him and said: “It is because all the people living in that town have bad characters that is why the area is called Kalabule".

The secretary said because of the verbal attacks he decided not to utter a word, got down from the vehicle and left for home.

Checks by the Daily Graphic also revealed that members of the Resurrection Power Generation Church in the area dislike the name Kalabule and have since decided to call the junction leading to the community “Resurrection Junction”.

Nii Shiatse gave a historical account of how the name Mataheko evolved. He said it was derived from the Ga word which translates: “I will sit down somewhere and take a rest”.

According to him, several years ago, Ngleshie Amanfro was located around the tollbooth area but the community was later relocated and the people were resettled at its current place after the tollbooth on the Weija-Kasoa-Cape Coast highway.

This was due to the construction of the Weija Dam by a former Military Head of State of Ghana, Ignatius Kutu Acheampong, who directed that the community should be relocated to its current place. The reason being that when the volume of water in the dam increased, it might submerge the whole community.

“Those using that route who carried heavy luggage on their heads would, occasionally, during the journey offload them, take a rest (Mataheko) and then continued their journey, but they usually left their luggage when they were about reaching home and walked home to ask their children to come for the luggage," the Djaase further recalled.

It is regrettable, however, that the first development challenge that catches the attention of any visitor to the Ngleshie Amanfro Mataheko town is its poor access roads which worsens during the rainy seasons.

Ngleshie Amanfro Mataheko is predominantly a farming and fishing community. It was part of the 48 ancient villages of Amanfro which later became known as Ngleshie Amanfro.

This is because Ngleshie Amanfro, which was founded in 1733, is a division under Ngleshie Alata (James Town). Ngleshie was added to the name Amanfro to differentiate the town from other towns that may also bear the name Amanfro. It covers about 40.2 square miles.

Some of the 48 ancient villages were deserted while new ones were created. However, the traditional authorities are taking inventory of the total number of towns or villages that are currently under Ngleshie Amanfro.