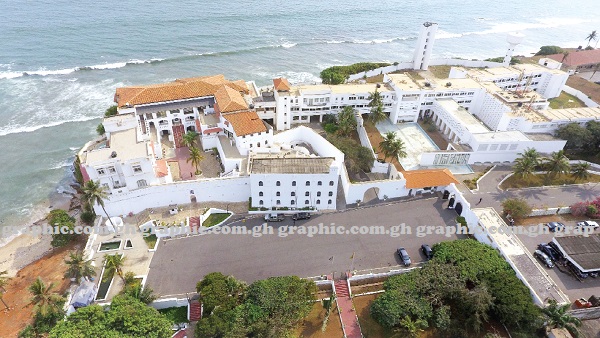 The Christiansborg Castle is located off the shores of the vibrant Osu in the capital, Accra.

In 1661, Jost Cramer, the Danish governor of the Cape Coast fort, Fort Fredericksborg, obtained the site for 3,200 gold florins from the then Paramount Chief Okaikoi of the Ga ethnic group. The Ga till date have their shrine on the premises where they perform annual rituals.

At this site, the Danes built a stone fort in 1659 to replace the earthen lodge that had earlier been erected by the Swedish African Company.

They named it Christiansborg, meaning ‘Christian's fortress’, after the King of Denmark, Christian IV, who passed away in 1648.

A rebellion in 1679 resulted in the assassination of the fort’s Danish commander. The new leader, a Greek named Bolten, later sold it to the former Portuguese governor of Sao Tome.

The Portuguese christened it ‘St Francis Xavier’, added on a Roman Catholic chapel and further fortified its bastions.

A lack of trade success caused the Portuguese to resell the fort to the Danes in 1683, after a four-year occupancy.

Danish rule was once again challenged and deposed 10 years later by the powerful trader and chief Assamani and his men from the inland state of Akwamu.

Assamani had previously infiltrated the Danish household by working as a cook. He retained control of the fort and traded successfully with all nations for almost a year.

In 1694, he sold the fort to the Danes for the ‘substantial sum’ of 50 marks of gold. He, however, did not return the keys to the castle and they have since been a part of the stool property of Akwamu.

Rapid growth in Danish trade, initially in gold, then in slaves, necessitated further expansions of the castle.

The castle was sold to the British in 1850 following the abolition of the slave trade by Denmark in 1803, which resulted in a severe trade decline.

The British colonial governors ruled from the castle after 1876. They, however, abandoned it from 1890 to 1901 when it was used as a constabulary mess and later as a psychiatric asylum.

In 1957, when Ghana welcomed Queen Elizabeth II as a guest for its independence celebration, the Queen stayed in a specially made room within the Osu Castle.

The Queen’s room has been maintained in its original state till date, with little additions.

Aside from the Queen, there have been many historic visits to the castle by international dignitaries, including US Presidents, namely Richard Nixon, Bill Clinton and Barack Obama.

In 2017, the castle — which is listed by UNESCO as a World Heritage site — was converted into a Presidential Museum as part of Ghana’s 60th-anniversary legacy project.

Visitors get to see the credential rooms used by the former British officials and former Ghanaian presidents, slave dungeons, walkway to the Door of No Return, a water reserve and a chapel.

The captivating seashore, fishing boats, the castle gardens with a wide variety of plants and a panoramic view of the township are other attractions to visitors.