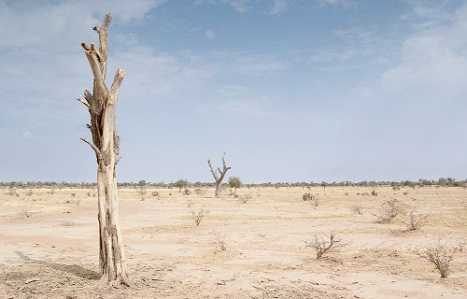 Desertification is an increasing ecological problem which occurs when previously fertile land becomes desert through deforestation, drought or improper agriculture.

It is the degradation of land in arid, semi-arid and dry sub-humid areas caused primarily by human activities and climatic variations.

Desertification does not refer to the expansion of existing deserts. It occurs because dryland ecosystems, which cover over one-third of the world's land area, are extremely vulnerable to over-exploitation and inappropriate land use.

Last Friday, Spain was the venue for the global commemoration of the World Day to Combat Desertification and Drought, on the theme: "Rising up from drought together".

The theme emphasised the need for early action to avoid disastrous consequences for humanity and the planetary ecosystems as a result of desertification and drought.

Poverty, political instability, deforestation, overgrazing and bad irrigation practices can all undermine the productivity of the land.

All these factors formed the basis for the UN General Assembly officially declaring the annual Desertification and Drought Day in 1997 through Resolution A/RES/49/115, with three main objectives: to promote public awareness of desertification and drought; to let people know that desertification and drought can be effectively tackled, that solutions are possible, and that key tools to this aim lie in strengthened community participation and cooperation at all levels, and to strengthen the implementation of the UNCCD in countries experiencing serious drought and/or desertification, particularly in Africa.

In actual fact, the World Meteorological Organisation in 2021 said the number and duration of droughts had increased by 29 per cent since 2000, compared to the two previous decades. When more than 2.3 billion people already face water stress, this is a huge problem, and UNICEF estimates that more and more people will be living in areas with extreme water shortages, including an estimated one in four children, by 2040.

The statistics are scary and show that every country, including Ghana, needs to take deliberate action against desertification and drought.

Indeed, the UN-Water 2021 report states: “No country is immune to drought”.

The 196 parties to the UNCCD, which included Ghana and which ratified the convention on December 27, 1996, encouraged the participation by local people in schemes to fight desertification and land degradation, such as tree planting exercises.

They firmly believed that land degradation neutrality was possible through strong community involvement and cooperation at all levels, and that is why we laud the Green Ghana initiative being championed by the government, which has already planted about 29 million trees since 2021.

The Daily Graphic believes that if we stay the course with the Green Ghana Day each year so that it becomes a tradition among Ghanaians, we will definitely stay away from desertification and drought. Concrete attempts should be made too to protect the trees planted, while we refrain from cutting down those that exist.

This conversation dovetails into the theme for the 50th anniversary of World Environment Day marked on June 5: “Only one earth”.

We must not only ratify conventions and formulate policies; we must also be deliberate in our actions to prevent land degradation and mitigate climate change. After all, we have only one earth.

Let’s help our farmers engage in good practices, provide proper irrigation for them, continue the war on people engaged in illegal mining and felling of trees by letting our institutions and laws work.

We have a responsibility to keep our ecosystems healthy and for posterity, so we prevent a recurrence of the 1981 to 1983 drought that hit the country.