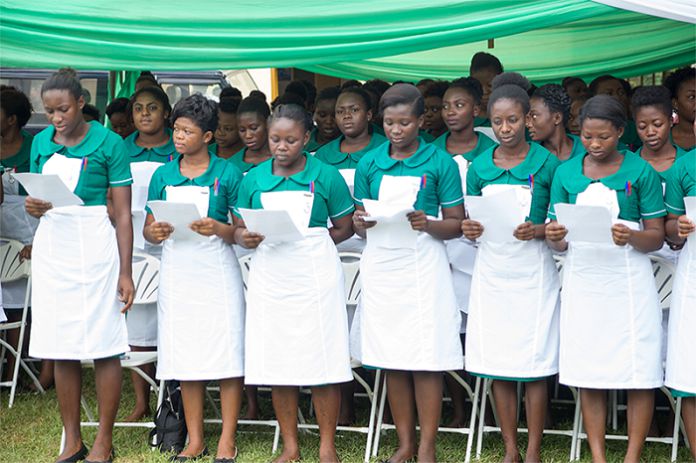 About 3,000 nurses and midwives are reported to have left the shores of Ghana this year alone to seek greener pastures abroad.

In our Monday, August 22, 2022 edition, we carried a report in which the Ghana Registered Nurses and MidwivesAssociation (GRNMA) disclosed that about 3,000 nurses and midwives had left the country.

That disclosure was made at the closing of the North Tongu District GRNMA Week celebration at Battor recently.

What was more worrying in the disclosure by the Chairman of the Volta Regional branch of the GRNMA, Moses Robertson Anyigba, was that there were clear indications that the exodus would soar beyond control sooner than later.

This is not new to the country, as we recall that we have gone this path many times.

In 2005, for instance, as a result of a shortfall in nurses arising from many of them heading outside the country, especially to the West, for better economic conditions, the government imposed a ban on newly qualifi ed nurses travelling abroad.

Largely, measures that were adopted, including a scheme that funded the education of nurses, who then had to be bonded to work in the country for five years, yielded results.

By 2015, there were enough nurses, such that the government thought it was no longer necessary to keep them under bond.

But the recent report of such large numbers of nurses leaving our shores is worrying and there is the need to have an immediate look at it to be able to put in place the necessary measures to deal with the issue.

Before the ban on nurses and midwives leaving was imposed in 2005, about 700 of them had left in 2004. That is what makes the over 3,000 of them leaving this year alone, while the year hasn’t ended yet, very disturbing.

We know too well the reasons for skilled people such as nurses and midwives to decide to leave the country. The poor and unsafe conditions in which these nurses and midwives work, the insecure nature of some health facilities in the rural areas and the rampant physical attacks on health workers in some communities have all been reported.

These challenges are not insurmountable.

They are issues with which a country like Ghana can and must deal with, with little or no difficulty, if we place our priorities right.

We must thus put in place the necessary measures that wil help stem the tide of the exodus of not only nurses and midwives but also general health workers.

Anything short of this will hamper the effective and effi cient delivery of healthcare services.

We know what to do as a country to keep our nurses, midwives and other critical health staff.

It is not everyone who leaves that is attributable to low salary.

Many will stay and workhere if the conditions under which they work are made friendlier.

The government has, over the years, endeavoured to provide more health facilities across the country.

Certainly, we have moved much farther than where we were 17 years ago when we had to place aban on the migration of health workers to other countries.

But more must be done to ensure that we reap the benefi ts from the huge investments we have made in the health sector, especially in the training of personnel, otherwise we will be fetching water with a basket - the water will drain out before it gets to its destination for its purpose to be realised.

In addition to the new hospitals that are being put up by the government, a sustainable programme must be instituted to ensure that all our health facilities are renovated and maintained to engender job satisfaction from working in them.

Nobody feels proud to work in a poor environment with cracked walls and leaking roofs.

It doesn’t stimulate confidence and satisfaction.

Recent disease outbreaks around the world, such as COVID-19, Marburg, monkey pox and Ebola are a pointer that nurses will continue to be in high demand.

For obvious reasons, the exodus of nurses, midwives and other medical personnel will not reverse by itself.

We must be prepared to face the hard truth regarding what it will take to halt the exodus.

Although the issue of brain drain is not limited to nurses and midwives in Ghana, we believe we are capable of putting the right structures in place and offer a little bit of motivation to bring improvement in the conditions of service of nurses, midwives and other medical personnel to cut down on the recent rate of exodus.