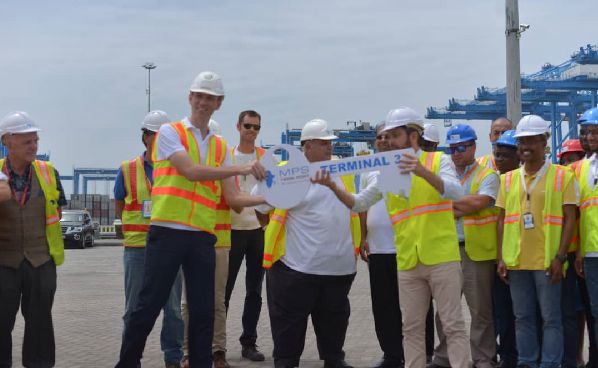 The first phase of the Terminal Three project of Tema Port has been formally opened for shipping business.

This follows successful tests and simulation exercises of the project by the Meridian Port Services Limited (MPS).

At a short ceremony in Tema on June 28, this year, the construction team handed over a symbolic key to the project transition team who then handed it over to the operations team of MPS.

It was at the presence of some executives of the Ghana Ports and Harbours Authority (GPHA), Tema Metropolitan Assembly (TMA), Customs Division of the Ghana Revenue Authority (GRA) and other stakeholders in the shipping business.

The Chief Executive Officer (CEO) of MPS, Mr Mohammed Samara, thanked the project team for delivering the project within the stipulated period.

He said the new port was to help facilitate the operations of stakeholders including the shipping lines, freight forwarders, importers and exports.

"Today is a wonderful day for MPS, GPHA, Ballore Transport & Logistics, APM Terminals and the entire port community. This port is to help facilitate operations of all stakeholders in the shipping industry," he said.

Also appreciating the work of the project team, Mr Samara bow down as a sign of respect to salute and honour the contributions of all stakeholders towards the completion of the project.

His views were, however, corroborated by the Director General (DG) of GPHA, Mr Michael Luguje, who commended the project team for delivering on the state-of-the-art facilities and also wished the operations team of MPS the best of success.

He urged the operations team to manage the new terminal as effectively and productively as possible to become the leading port in Africa in terms of all the performance indicators.

"I will also encourage the team to work acidiously to make this new port a transshipment hub serving the entire Sub-Saharan Africa (SSA)," the Director General added.

For her part, the Director of Tema Port, Ms Sandra Opoku, stated that the completion of two deepwater berths was a significant milestone for the country as a whole.

She said the new terminal was a historic booster to the country's trade fortunes.

With it, she observed that Ghana stands tall among its African peers when it comes to countries with world-class seaports.

The Municipal Chief Executive (MCE) of TMA, Mr Felix Nii Anang-La, also took the opportunity to thank all stakeholders for making the new port a reality.

"As this terminal is going live today, I will urge all stakeholders to come on board in order for the new port to serve its purpose for which it was built," he said.

Sharing personal experience, the MCE disclosed that foreigners have already started praising facilities at the new port, as his recent trip to Denmark showed.

He declared the support of his office to provide the needed assistance to ensure the port become a leading facility in Africa.

The project is a joint venture between GHPA, MPS, Ballore Transport & Logistics and APM Terminals.

It was developed at a cost of $1.5 billion to provide world-class port infrastructure for the next 100 years.

The project involves the building of a 3.5-kilometre breakwater and an access channel harbouring 16 metres deepwater berths to accommodate larger vessels with sophisticated port handling equipment.

In line with it, about 127 hectares was reclaimed from the sea for which the new terminal had been designed.

Under the arrangement, the MPS has completed two berths for operations to start and continue work on the next two berths in 2020.