Rigorous interventions in agric have paid off - President Akufo-Addo 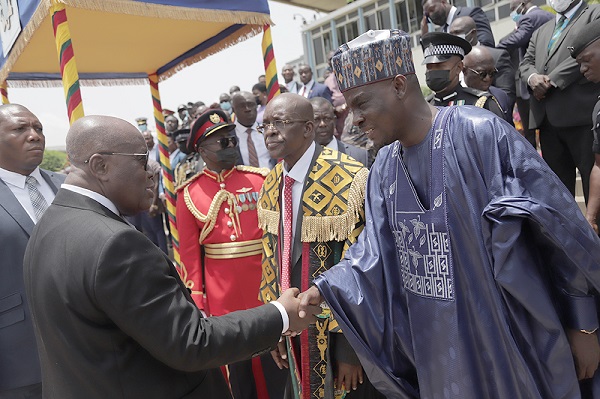 Five years ago, the government began the implementation of a number of special initiatives meant to accelerate the transformation of the country.

Chief among the initiatives is the Planting for Food and Jobs (PFJ), a special project meant to transform the agricultural sector through mechanisation to ensure food security in the country and for exports.

Since its implementation, there have been mixed reactions to the success of the initiative.

While some have described it as a failure, others think otherwise, a development which has always forced the President to always use any available opportunity to tout the successes so far.

Delivering his 5th message on the State of the Nation to Parliament on March 31, 2022, President Nana Addo Dankwa Akufo-Addo did not mince words when he reported to the House that the successes of the PFJ initiative have positively impacted the lives of smallholder farmers across the country.

He said the interventions made in the agriculture sector had improved the livelihoods of farmers and other stakeholders along the value chain.

“There is no doubt that but for the vigorous interventions we have made in agriculture in the past five years, which have made us more self-reliant in our food needs, our country would have been at much greater risk as the fallout from the dramatic worldwide increases in freight charges hit prices in our markets and on our supermarket shelves,” he said.

President Akufo-Addo noted that the significant investment made in the Ghana Commercial Agriculture Project (GCAP) has resulted in the availability of a total of 13,190 hectares of additional irrigable land, through the rehabilitation of Tono, Kpong Left Bank (KLB) and Kpong Irrigation Schemes for rice and vegetable cultivation.

He cited improved rice yields increase from 4.5 tonne s per hectare to 5.5 tons per hectare, leading to increased production and growth in farm incomes as some of the immediate benefits arising from the schemes.

“This has benefitted some 14,264 smallholder farmers directly, creating some 40,000 jobs along several value chain activities generated from the irrigation schemes,” he stated.

In particular at the KLB Irrigation Project, the President said that government, through the Ministry of Food and Agriculture, had recently engaged nine large-scale investors in addition to smallholder farmers at the project (KLBIP) who would be producing rice, maize and vegetables using modern production technologies to achieve improved productivity and production within the next three months.

President Akufo-Addo also said the government had invested in the vegetable sector through the Ghana Peri-urban Vegetable Value Chain Project (GPVVCP) by providing irrigation infrastructure covering a total of 541 hectares, which had directly impacted vegetable farmers in the Greater Accra Region.

He added that the government had provided inputs and technical support for vegetable farmers at Hikpo in the Volta Region and Asokwa in the Ashanti Region, and that the project had provided off-taker arrangements for the domestic and international markets.

“The construction of 80 warehouses with a combined storage capacity of 80,000 metric tonnes (MT) has been completed and their entry into the food production chain is offering better protection to the harvests of farmers,” he said.

The President said the cocoa industry had marked a lot of interesting and far-reaching achievements in the past year, including producing 1,047,385 tonnes, the highest ever recorded in Ghana’s history.

Together with Cote d’Ivoire, he said Ghana had addressed the inequalities in the international marketing system of cocoa by paying a Living Income Differential (LID) of US$400 per tonne of cocoa to farmers.

“This is a remarkable initiative that cushions the income of the Ghanaian cocoa farmer, the backbone of our economy,” he said.

An innovation in the cocoa sector he cited was a non-adjustable electronic weighing scale that had been introduced for the purchase of cocoa from cocoa farmers.

He said the scale, which was introduced at the start of the cocoa season in October last year, had been approved by the Ghana Standards Authority (GSA) and could not be tampered with by purchasers.

“The same use of technology to attract more young people into agriculture is continuing with the training of 537 youth in the production of high value vegetables using greenhouse technology. One hundred and ninety of them have been on an 11-month internship in Israel and they are back with a lot of enthusiasm. We are expecting great things from them,” he added.