The Managing Director (MD) of Stanbic Bank, Kwamina Asomaning, has stressed the need for both employers and employees to leverage digitisation to ensure a thriving employment sector.

He said digitisation played a key role in the evolution of the job market by transforming existing jobs.

This, he said, therefore demanded new skills to carry out new tasks.

Speaking at the second quarter edition of the Graphic Business-Stanbic Bank Breakfast meeting in Accra yesterday, Mr Asomaning said the world was consuming more products and services than ever before with digital and electronic components.

Therefore, he said, digitisation gave rise to new jobs while others might become redundant.

The meeting which attracted participants from all sectors of the economy, including academia, was on the theme “Tackling Unemployment to Create Wealth-Opportunities for Ghana”.

“The opportunities for formal and self-employment are becoming increasingly skewed towards individuals who possess the skills which contribute to digital economies and ecosystems. Job market entrants need digital skills to get a foot in the door. Therefore, employees across all sectors, without exception, need to leverage on their digital capabilities in order to thrive in the workplace. Businesses need to embrace digital ways of working to keep up with competition,” he said.

Mr Asomaning noted that while there appeared to be some inconsistency in the unemployment figures, it was undisputed that unemployment was a problem, with its significant social economic impact on the society.

He said unemployment was often associated with the youth but it did not necessarily know a specific age.

The Stanbic Bank MD said there were adults in the communities who either had not been able to acquire the right skills and training to apply to a vocation or those who had struggled to match the existing skills set to the opportunities available on the job market.

“How does our domestic education system serve us and our youth in either preparing for structured employment or entrepreneurship? How might we in our set of spheres of influence, make a dent in the country's unemployment figures?, he quizzed.

For her part, the Managing Consultant of Purple Almond Consulting Services, Florence Hope-Wudu, noted that people who acquired education sought to work only in the formal sector whereas there was a big opportunity in the informal sector. 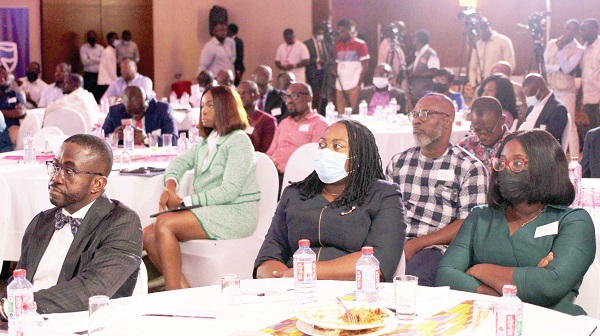 However, she said the above often did have the skills needed for a full-time employment but refused to take up available jobs that might not require high skills such as agriculture.

Therefore, she said a lot had to do with changing the mindset.

“The skills are not matching but do we make use of what we have? Agriculture offers a big opportunity because we are not able to feed ourselves.

Look at our arable lands, how much are we farming to feed ourselves? Nobody wants to get into farming and it is surprising because if we don’t produce to feed ourselves, how do we get there?” she asked.

According to her, entrepreneurial skills was the major skill in demand now.

She urged the youth not to get out of school thinking that they would be readily employed but must endeavour to build their skills as young graduates.

In his welcome remarks, the acting Editor of the Graphic Business, Charles Benoni Okine, said although the unemployment rate of 13.4 per cent as published by the Ghana Statistical Service (GSS) was right, there was a debate as to whether the methodology adopted painted the actual picture on the ground.

However, he noted that the discussions on how to find a lasting solution to the unemployment problem in the country was still more relevant than before in view of the threat the solution posed to national security and urged for action to bring the situation under control.