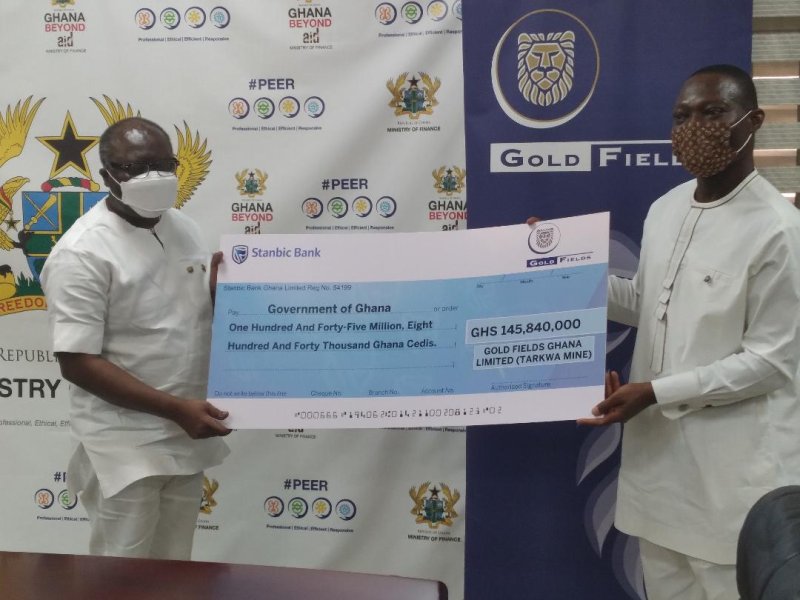 Gold Fields Ghana Limited has presented an interim dividend and guaranteed advance payment, totalling GH¢159million to the government for the 2021 financial year concerning GoldFields' Tarkwa Mine.

The second cheque for more than GH¢13 million is the Guaranteed Advance Payment for the 2020 financial year, in respect of Abosso Goldfields Limited, Damang Mine.

Mr Alfred Baku, the Executive Vice President and Head of Gold Fields West Africa, presenting the cheque said the government held a 10 per cent share in GoldFields Ghana through a free-carried interest.

Mr Ken Ofori-Atta, the Minister of Finance, who received the cheque on behalf of the government, said under clause 6.2 of the ratified Development Agreement between Abosso Goldfields Limited, Damang Mine and the Government, Gold Fields was to pay the government an annual Guaranteed Advance Payment of 5 per cent of profit after tax in case it was not in a position to pay its normal dividend.

He said this was because GoldFields decided to reinvest approximately US$1 billion in the mine as part of the Development Agreement with the government.

“The reinvestment project started in 2017, and after three years of hard work, we have achieved more progress than anticipated,” he said.

The Foundation has so far invested US$79milion in development programmes and shared-value projects in host communities in the Western Region.

He said one of the major projects funded by the Foundation was the 33km Tarkwa Damang road, which cost US$27million and was completed last year.

“Another key investment, which is ongoing, is the refurbishment of the T&A Park at Tarkwa into a 10,400-seat stadium, at a cost of over US$16million. This will be the new home of Medeama SC and, in time, will hopefully host the Black Stars in Tarkwa,” he added.

He said funding for the Foundation was primarily through contributions from the Tarkwa and Damang mines and based on their operational and financial results.

Mr Baku said for every ounce of gold produced by the mines, one US dollar was donated to the Foundation, in addition to 1.5 per cent of the mines' profits before tax.

He said GoldFields was a major contributor to national development and in 2020 the company contributed US$170 million in corporate income tax and royalties, US$23 million as employee pay-as-you-earn and US$20.9 million in dividends to the government.

Mr Baku also said the Company contributed over US$2.3 million in COVID-19 support to employees, host communities and the government.

Mr Ofori-Atta said the dividend was a surprise income to the government with the drawing of the National budget.

He said Africa was expected to need about $2trillion but currently, Ghana had about 58 million tonnes of potential carbon emission and the country must explore ways to monetise that to build against future pandemics.

”We need to be working with major Corporate entities to discuss the climate issue in a way that also enables us to meet the global challenge of zero-emission by 2030 and we need to get very creative about how to do that,” he said.

He said as a gold exporting country and being one of the largest exporters of gold in Africa for the past three to four years, the country needed to have an LBMT refinery of its own.

The Minister explained that “if we are to refine 10 per cent of all the gold that we use here over the LBMT license we will end up with about $55million of profits.”

Mr Ofori-Atta said Africa produced about 870 tonnes of gold from the 50 main countries a year and it was only South Africa and maybe Zimbabwe that had refineries of capacity.

He said the government would need support to be able to build a refinery with LBMT standards, which would allow for the processing of the gold.