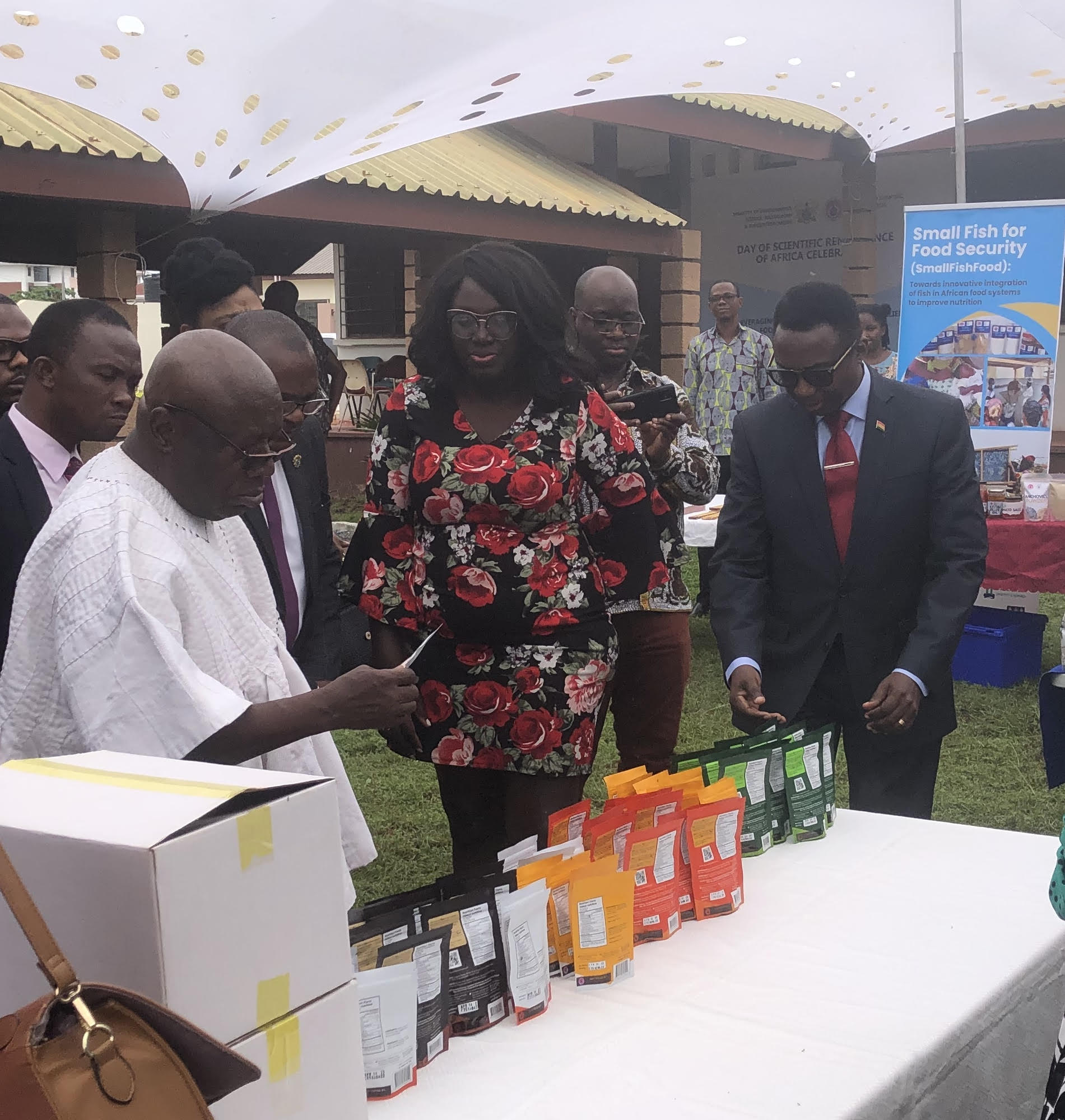 Professor Charles Tortoe (right), the Director of the CSIR-FRI, Dr Kwaku Afriyie (left) the Minister for Environment, Science, Technology and Innovation at an exhibition which forms part of the Africa Scientific Renaissance Day celebration
30.5k Shares

THE Minister for Environment, Science, Technology and Innovation, Dr Kwaku Afriyie, has called on Ghanaians to engage in what he described as ‘food nationalism’ especially in these difficult times.

Describing food nationalism as the consumption of locally grown produce, he said that would also help to promote a healthier lifestyle while helping the country to cut down on food imports.

Dr Afriyie made the call last Thursday at an event organised by the Council for Scientific and Industrial Research- Food Research Institute (CSIR-FRI) in Accra to mark the Africa Scientific Renaissance Day (ASRD) celebration.

“We have the capacity and technology to grow what we eat because embedded in this whole food system is the problem of national security. The Ghanaian populace must engage in food nationalism especially in these difficult times, we must eat our own because they have a lot of nutrients.

“Now the prices of bread are high and everybody is complaining and we forget that we do not grow wheat here so why don’t we change our taste?” he quizzed.

The ASRD celebrated on June 30 every year was instituted for African countries to reflect the continent’s contribution to the development of modern science and technology.

The theme for this year’s celebration was: “Leveraging Digital Technology for Resilient Food System and Enhanced Food Security in Ghana”.

The minister said the increased relevance of global drivers such as climate change, urbanisation, and the globalisation of unhealthy diet, particularly in under-resourced African countries such as Ghana was rapidly making food insecurity an even greater determinant of health.

Therefore, it was crucial for the country to look at the entire food and agriculture systems as the first pillar for health delivery and as pivotal keys to achieving many of the Sustainable Development Goals (SDGs) on zero hunger, good health and well-being, responsible consumption and production, climate action, life below water and life on land.

He explained that the country had reached a stage in its journey as a country, where the scientific community must play the leading role in its quest for national development.

“Leveraging digital technology for resilient food system and enhanced food security calls for an integrated sustainable food system to deliver food and nutrition security for all, while ensuring that the production methods of today do not compromise the food security, nutrition and health of future generations.

“Our systems must show resilience. This is where we are most needed as scientists, researchers, innovators and technologists,” Dr Afriyie said.

In his presentation on Ghana’s food security, the Director of the CSIR-FRI, Professor Charles Tortoe, said the country was self-sufficient in the production of staple roots, tubers, plantains and cereals, except rice that large volumes are imported annually.

He added: “However, the country is capable of becoming self-sufficient in rice production in the medium to long term.”

“Food imports for Ghana increased by 17.4 per cent through 2000 to 2021 period. If we are able to maximise postharvest losses, the country can significantly cut down on food importation,” he said.