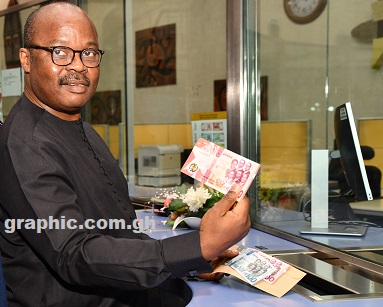 It has emerged that Crane Currency, a currency and security printing company in the United States of America (USA), printed the newly introduced GH¢200 and GH¢100 banknotes for the country.

Information available to the GRAPHIC BUSINESS indicated that Crane Currency, which prides itself as being in the currency business for over 200 years, won the bid from the Bank of Ghana (BoG) that sought tenders from interested firms to provide the said service.

That win enabled Crane Currency to design, print and supply the country’s highest currency denominations that were launched on November 29.

One source explained that the company was selected from a pool of competitors that included Dela Rue of UK, G&D of Germany, Canadian Banknote Company of Canada, Oberthur Fiduciaire SAS of France and Orell Füssli Security Printing Ltd of Switzerland.

The sources, however, declined to mention the value of the contract, citing confidentiality clauses.

While declining to speak on specifics, the Head of Currency Management at the BoG, Mr John K. Gyamfi, said competitive bidding was the surest way to getting value for money when it came to sourcing suppliers for currency design, printing and supply.

He explained that although cost was always a key determinant in such tenders, design and ability to deliver on time also mattered; depending on the circumstances.

“But if it is just reprint, then the cost is the key thing,” he said.

The cedi banknotes in circulation are refreshed virtually on a daily basis through the addition of newly printed bills to replace worn-out and destroyed currencies.

With regard to Crane Currency, it is understood that this was the second time in two years that the company won a bid to supply the BoG the national currency, the cedi.

In 2017, when the BoG was looking for a currency supplier to design, print and supply banknote to commemorate its 60th anniversary, Crane Currency won the bid and went on to supply the GH¢5 commemorative note.

The company said on its website that “the banknote features Crane Currency’s security feature RAPID®, 3mm wide, customised with the ‘Black Star,’ a symbol widely recognised in the region.

“When the note is tilted, the Black Star appears to pulsate, while the white figure five remains stationary and legible,” it added.