Checkpoints increase to 80 on Tema-Paga corridor 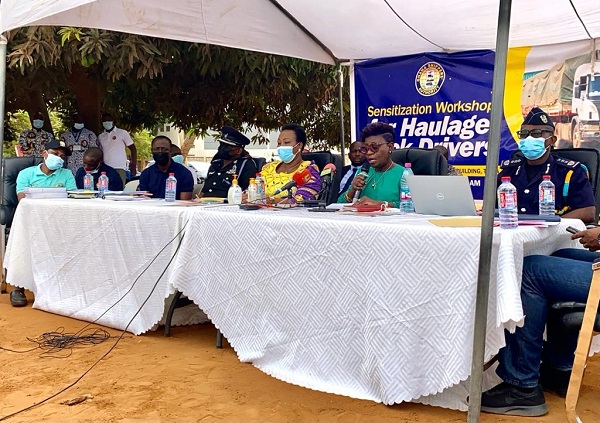 It has emerged that attempts to stamp out red tapes and cut down illegal checkpoints on the country’s trade corridors are yielding less results than previously reported.

This is because checkpoints of the various security agencies on the 766 kilometres road have risen from 61 in November 2017 to 80 in the second week of March, this year.

A recent fact-finding and advocacy trip on the Tema-Paga corridor by the Ghana Shippers' Authority (GSA) showed a rather disturbing springing up of checkpoints by Police, Customs, Immigration, Forestry and Axle Load officers.

The Chief Executive Officer (CEO) of the GSA, Benonita Bismarck, who made this known at the fourth Sensitisation Workshop for Haulage Truck Drivers held at Tema on March 16, said what was even more disturbing are the demands for illicit payments with the associated delays by these uniformed personnel at the checkpoints.

She said with the kind support of the Police Administration, the Authority commenced some sensitisation seminars for Police officers along the corridors.

She said the the programme which started in November 2020, has covered Kumasi, Techiman, Tamale, Bolgatanga and Wa with very encouraging outcomes with respect to the conduct of the Police along the corridors.

She said plans were underway to extend these seminars to key locations along the coastal and eastern corridors in the first half of this year.

"At a forum of Truck Drivers and Owners like this, it is important to emphasize your crucial role in achieving the lofty objectives of the African Continental Free Trade Area (AfCFTA). "The expected increase in trade in goods in the free trade area will be mainly carried by trucks; therefore, there will be fresh opportunities for the haulage transport industry, especially to the land-linked countries.

"As key stakeholders, it will be prudent to initiate discussions on the existing potential and to strategically position yourselves to take maximum advantage," she said.

Ms Bismarck said it was important to state in closing that the growing political instability in some countries in the West Africa sub-region was impacting on security of transit corridors.

She said a few years ago, some of the transit drivers lost their lives in the pursuit of their legitimate business of hauling cargo from the port to their destinations.

"In spite of the lingering threats to the cargo and your personal lives, you have braced up the challenge and continue to provide indispensable service to the shipping public, and for this we wish to salute you gallant hauliers.

"I wish on behalf of the Authority to thank all stakeholders for taking time off their busy schedules to be here and contribute to the day’s discussions," she added.

The General Manager in-charge of Corporate Affairs at Ghana Ports and Harbours Authority (GPHA), Mrs Esther Gyebi-Donkor, said drivers and owners of trucks were very crucial in the transportation of cargo from the seaports to the owners.

"Without the drivers and their owners the cargo wont get to their destination and so they are very critical in the value chain.

"There are a lot of stakeholders whose activities affect these truck drivers while enroute to their destinations and so there are some rules and regulations they need to abide with going forward," she said.

She added that a new transit truck park built by the GPHA has been able to improve the country's revenue by 35 per cent.

“Last week, we commissioned the transit truck park at Paga and we were happy to note that that facility has been able to increase the government's revenue by 35 per cent.”