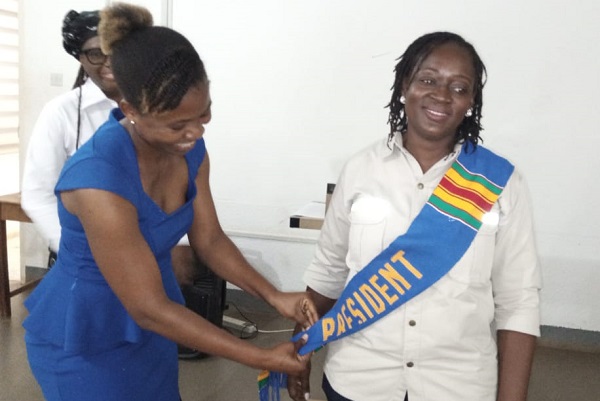 The Asanko Mining firm chapter of Women in Mining (WIM), Ghana, has set a three-year target to increase the female population of its staff from 17 per cent to 25 per cent.

According to statistics from the Minerals Commission, an average of nine per cent of women are currently in the male-dominated mining industry.

The newly inducted president of Asanko WIM, Gloria Bentil Mensah, and her new executives are pushing for more qualified women to bridge the female-male gap.

As a result, the team is shifting focus from mentoring university female students to SHS students to catch them young and to develop their interest early in the industry.

Mrs Bentil Mensah told Daily Graphic after her induction ceremony at Manso Abore, in the Amansie West district of the Ashanti region that the idea of going to community schools was to whip up interest in the study of Science Technology Engineering and Mathematics (STEM) education to put them in a favourable position to gain employment after tertiary school.

While not downplaying the study of humanities, Mrs Bentil Mensah said the study of STEM education especially engineering will give the females "a firm advantage for employment."

She expressed worry that most of the females especially in mining communities only aimed at becoming nurses and saw engineering as an area reserved for men.

"This mindset is worrying and needs to be changed. Nursing is a good course but we as women can also do what the men are doing and even do it better," she said.

They are expected to promote women's involvement in the industry through education and support with a key focus in Asanko's catchment areas.

While not abandoning the university mentorship programme, Mrs Bentil Mensah said "my main focus is to tackle the basic schools in the catchment area and make those of us in the industry more visible."

She reckoned that the reason why females in such areas pursue certain courses was that those were the people or professions they always saw.

"We have to make ourselves more visible, visit the communities regularly in our uniforms, have regular engagements with them and break any barrier associated with it," she said.

The newly inducted president said Asanko's female to male ratio of 17 per cent remains the highest but said there was the need to push for more women till we reach the 25 per cent mark.

"I'm convinced that if we continue with this programme and we are consistent and persistent, we should be able to reach a 50-50 per cent ratio with our male counterparts in the future," she added.

"I'm prepared to walk the talk," she said.

The immediate president, Miss Dzokpo, said it was time for more females to pursue mining programmes at the University of Mines and Technology (Umart), Tarkwa, to guarantee a place in the industry.

"Now, a lot of females are driving the company's heavy-duty trucks at the plants which hitherto, was the preserve of men.

"This tells you that the times have changed. And with technology, you don't need the strength of a man to operate machines at the site. All one needs is training and education to fit the bill," she said.

The national president of WIM Ghana, Dr. Georgette Sakyi-Addo, said it was time to introduce females to earth sciences early in life to demystify any fear associated with it.

"Once they grab it early, we are good to go. Then they can be in a better position to compete favourably with their male counterparts. I believe it is doable," she said.