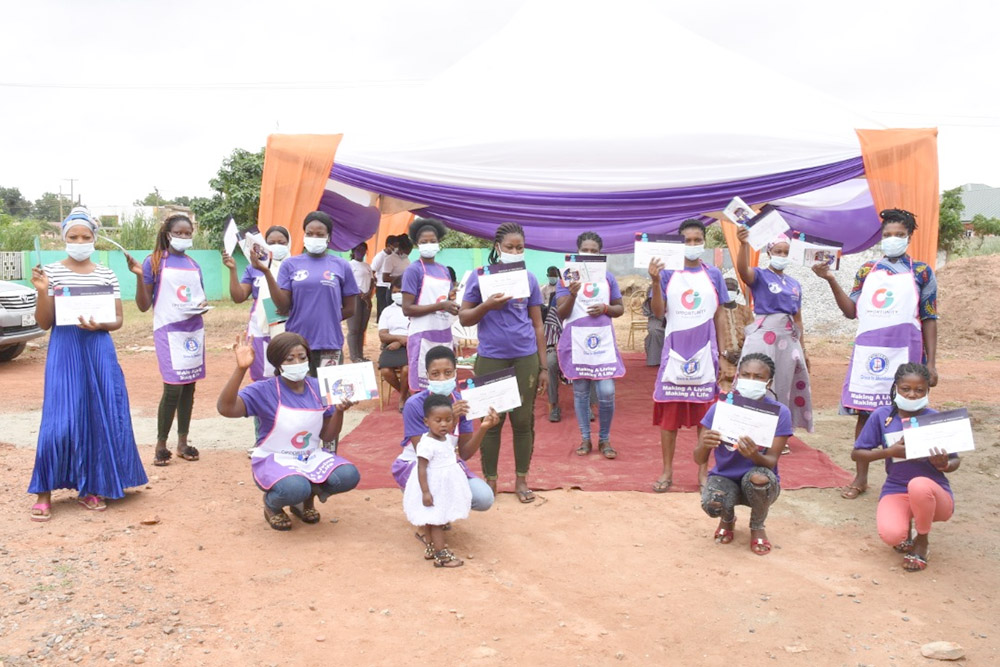 Fifty-four street porters (Kayayei) have benefited from a youth development programme meant to equip them with vocational skills and expose them to basic knowledge on finances.

Known as the Youth Development Programme, the skills enhancement initiative is the brainchild of Opportunity International Savings and Loans (Opportunity), a leading savings and loans company, meant to identify and develop underprivileged persons by giving them alternative skills that can fetch them income.

The 54 girls are the second batch of beneficiaries of the initiative that started last year.

They passed out of the programme at a graduation ceremony in Accra, paving the way for them to start deploying the skills they had been equipped with.

The beneficiaries were selected mainly from the Darkuman Market and Agbogbloshie Kokomba Yam Market in Accra Central.

It said an additional three-week intensive residential training was provided for these girls in some vocational skills, including bead making, soap making and bakery.

"They were allowed to choose a trade out of the various skills developed to enable them to earn some income to fend for themselves and their families and help them move away from living in the streets," it added.

Tools
The statement added that startup kits for the making of beads, soap and bakery were given to them at the graduation.

It said some of the girls would also receive startup capital to help them start their trade after the graduation.

It explained that they aimed to empower these girls with alternative livelihood skills to earn sustainable income and to become responsible young adults in a bid to transform them to be independent and economically active.

It said it also sought to bring them into the formal financial services and enable them to avoid the risks they were exposed to in the streets.

According to the statement, the girls were excited about the great opportunity they had received from Opportunity International and expressed gratitude to the funders of the programme.

“They were optimistic about the success of the trade they had chosen and would also welcome the opportunity to train other girls who may need to learn from them," it said.

The acting Head of Transformation, Madam Christie Love Koufie, in presenting the items to the girls encouraged them to use their acquired skills to better their lives and those of their families.

Mode of selection
The statement said the programme identified vulnerable girls who had relocated from various places, especially from the northern part of the country to the south to seek greener pastures.

It said, "These girls are usually exposed to extreme hardship and are left at the disposal of some irresponsible men who rape or impregnate them and they are left to fend for themselves.”

The statement added that the girls were engaged in the carrying of loads, working as assistants in traditional restaurants (chop bar assistants), dishwashers and home cleaners.

"They often struggle to have shelter and this exacerbates the challenges that confront them,” it said.

Funders
The programme was funded by The Allan & Nesta Ferguson Charitable Trust through Opportunity International UK. The Allan and Nesta Ferguson Charitable Trust was set up in 1979 by the son and daughter in-law of the Ferguson family, John and Elnora. Its objectives have closely followed the interests of the Ferguson family in their commitment to education, peace and development in the Third World.

Opportunity International delivers this programme as part of its holistic global strategy of financial strategy which targets such vulnerable groups. The institution serves about 570,000 depositors with loans, deposit products and other services across 10 out of the 16 regions of the country.