Development Bank Ghana ready in 2 months; US$500m to be mobilised as seed fund 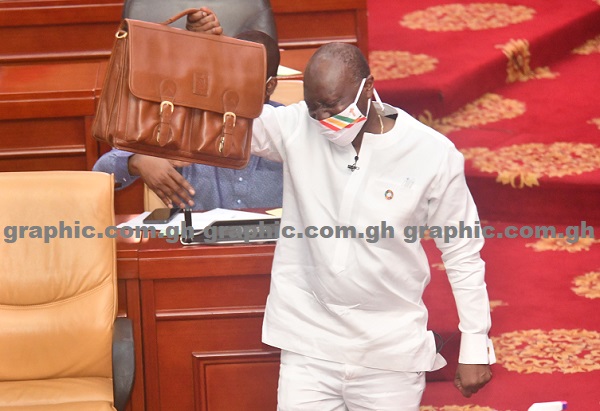 The government is in discussions with four different international financial institutions to establish a new bank by September this year.

The institutions, which include KfW, World Bank, AFD and European Investment Bank (EIB), are working in collaboration with the government to put in place the necessary impetus to support the creation of the bank.

It is expected that the combined resources from these international institutions will amount to about US$500 million by December 2021.

The new bank, to be known as Development Bank Ghana (DBG), is to focus on transforming industries, agriculture, agro-processing, and housing and mortgage sub-sectors of the economy over the medium term.

Promotional bank
The Minister of Finance, Mr Ken Ofori-Atta, who disclosed this during the presentation of the mid-year review of the 2020 Budget and Economic Statement to Parliament in Accra on July 23, observed that the DBG was to serve as a promotional bank for the country when established.

He said it would focus on mobilising medium to long-term funds and channelling them into the economy through the financial system as a wholesale bank.

"The bank will focus on transforming the industry, agriculture, agro-processing, and housing and mortgage sub-sectors of the economy over the medium term.

"It will serve as a promotional bank for the country, with a focus on mobilising medium to long-term funds and channelling them into the economy through the financial system as a wholesale bank," he said.

Combined resources
When established, the minister said, the bank would deploy products and instruments such as credit guarantee funds, refinancing of Participating Financial Institutions (PFIs) loans, term loans, business development services and factoring, among others.

The proposed bank, he observed, had generated keen interest from major international financial institutions willing to provide funding for its establishment.

He explained that it was expected that the combined resources from those international institutions would amount to about US$500 million by December 2021.

"Mr Speaker, the bank is also expected to source funds from the domestic, regional and international capital markets through a periodic issuance of bonds, diaspora instruments and direct borrowing,” he said.

Recovery institution
According to Mr Ofori-Atta, the bank would be positioned as a post-COVID-19 recovery institution, learning from the experience of KfW and Development Bank of Singapore, among others, which were critical institutions for the transformation of their respective countries.

He said DBG would be regulated by Bank of Ghana (BoG), with a competitively selected independent board and management.

He noted that the government completed a draft Development Finance Institutions Bill, 2020, which received Executive approval and was a key regulatory pillar for the promotion of the development finance ecosystem.

This bill will be laid in Parliament for consideration and passage.