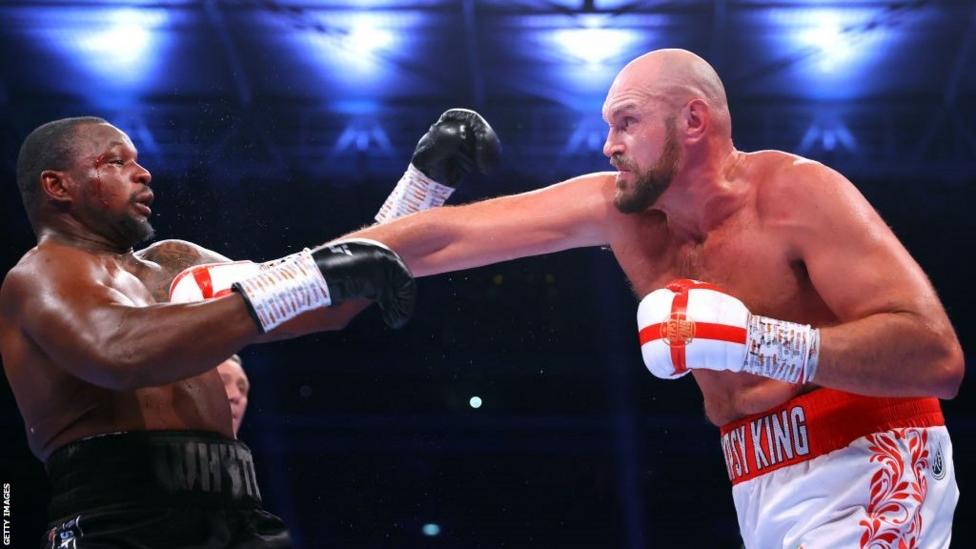 Whyte had no answer to Fury's punching power Follow @Graphicgh

WBC champion Tyson Fury produced a stunning one-punch stoppage in the sixth round to beat fellow Briton Dillian Whyte and then insisted he will retire from boxing.

Fury dominated what was a scrappy bout and then unleashed a vicious right uppercut.

Whyte, admirably, got to his feet within the count before staggering into the referee as the fight was halted.

"This might be the final curtain for the Gypsy King," Fury said post-fight.

He added later: "I've spent a lot of time on the road. I've been away for a long time. I fulfilled everything I've ever wanted to fulfil.

"I will retire as only the second heavyweight in history, after Rocky Marciano, to retire undefeated. I was unbeatable at this game."

Fury - who also retained his Ring Magazine belt - is unbeaten in 33 bouts, while Whyte - suffering his third loss in 31 fights - fell short on his first attempt at a world title.

If Fury does decide to hang up the gloves, the 33-year-old will miss out on an opportunity to fight for the undisputed crown - a fight which could potentially be staged later this year - and a chance to cement his status as Britain's greatest ever heavyweight.

"I promised my wife that would be it after the [Deontay] Wilder fight," he added. "But I got offered a fight at Wembley and I owed it to the fans. What a way to go out."

Fury's wife Paris told BT Sport: "I would like him to come out now. He has nothing more to prove. If he had anything left to do, I would say 'Yeah Tyson, you do it'. But he has nothing to prove.

"For Tyson to keep boxing, it just seems for one reason and I know in my heart, I think the only reason that Tyson will come back is for the unification fight."

With 94,000 fans in attendance - a post-war British record - there was an electric atmosphere like no other for a fight dubbed by some as the greatest all-British heavyweight dust-up in history.

Boos echoed around the iconic stadium as a pumped-up Whyte let out his trademark wolf-like howl before walking to the ring.

Fury's ring walk was extravagant. It began to the tune of Don McLean's 'American Pie', soon turned into 'Juicy' by Notorious B.I.G and ended on 'Sex on Fire' by Kings of Leon. Fury then sat on a throne as fireworks blasted skywards, before heading towards the ring.

He towered over Whyte as the two men touched gloves. Fury teased before the fight that he could switch to southpaw and neutralise Whyte's dangerous left hook but, surprisingly, it was Whyte who came out as a southpaw in a cagey opening round.

It was then Fury's turn to switch from orthodox in the second as the battle of mind games continued, with the champion edging the opening two rounds.

He landed with a solid two-punch combination in the third, prompting Whyte to charge at his opponent. But the challenger could not get close to Fury, who used his height and reach advantage to keep Whyte at bay as the fight progressed.

The contest truly heated up in a spicy fourth round. Whyte connected when asked to break, which clearly agitated Fury.

The fighters twice received a telling off from Mark Lyson, as the referee struggled to control the two men who boast a combined weight of 37 stone.

Whyte's telegraphed overhand rights were getting nowhere close to the elusive Fury, who was connecting with ease.

Then came arguably Fury's greatest punch of what is proving to be an illustrious career. He teed it up with a left jab and as Whyte stepped forward, Fury whipped in the brutal uppercut.

Whyte fell back on the canvas. He channelled the warrior spirit he spoke of before the fight but, as he made it to his feet, was clearly in no position to continue.

Fury insists he will hang up his gloves

Fury, as expected, took the microphone and treated fans to his own rendition of 'American Pie' in the ring following his victory.

It was a singsong to end the perfect homecoming party for the Morecambe-based fighter, who was boxing in the United Kingdom for the first time since 2018.

He said before the fight that this would be his last. That by boxing at Wembley he had reached his pinnacle.

Many in the sport took those comments with a touch of scepticism - it is something he said several times before - but it seems Fury is sticking to his word.

The lure of fighting the winner for all the belts - and the lucrative nature it brings, particularly if Joshua is victorious - could just tempt Fury to halt his retirement plans.

A career of highs and lows

If this is the end, however, it is a remarkable career from a man who at 6ft 9in and 19 stone has an ability to glide across the ring resembling an elegant ballroom dancer. His style, for his size, is unmatched.

He is a boxer who went from narrowly beating John McDermott on points for the English title in Brentwood to becoming a unified world champion, shocking long-reigning champion Wladimir Klitschko in Germany in 2015.

A boxer who came back from over two and half years out of the sport and reclaimed a heavyweight title, cracking America and sharing arguably one of the greatest trilogies in the sport with Deontay Wilder.

He has entertained reporters by dressing up as batman or taping his mouth shut at media conferences. Fury even had time to join the scripted world of professional wrestling.

In the second coming of his career, Fury has spoken openly about - and become an advocate for - mental health struggles.

But his career has not been short of controversy. Not long after his first world title, Fury made homophobic and sexist remarks during an interview.

He previously tested positive for a banned steroid - something he blamed on eating uncastrated wild boar - and later admitted to use of drink and drugs to help deal with depression.

More recently, his fight with Whyte had been somewhat overshadowed by Fury's links to Daniel Kinahan, who earlier this month was among seven people hit with worldwide financial sanctions by the United States.

Fury had previously been advised by Kinahan but this week insisted he has "absolutely zero" involvement with the Irishman.

It has been a career full of highs and lows. But despite the retirement, seeing the Gypsy King in a ring again - with potentially an opportunity to cement his status as the greatest British heavyweight in history - is wholly possible.

What next for Whyte?
Apart from the few months following his defeat to Alexander Povetkin in 2020, which he then avenged, 34-year-old Whyte had been mandatory challenger for the WBC belt since 2017.

"Dillian is a warrior and I believe he will be a world champion," Fury said as he and Whyte embraced post-fight.

"One of the greatest and, unfortunately, he had to fight me tonight. You are not messing with a mediocre heavyweight, you are messing with the best man on the planet."

Since his first career defeat to rival Joshua in 2015, Whyte has proven his world-level credentials with wins over the likes of Joseph Parker and Povetkin. He is still a big draw in the sport.

"There wasn't a lot in it - it was a close fight and I didn't feel like I was outclassed in there," Whyte told Radio 5 Live.

"My game plan was to press him and start moving forward. I was trying to attack but one slip and I got caught with the shot.

"He's a big awkward guy - I was expecting that.

"It was always going to be an awkward fight, but I was trying to set up and be patient and land what I could early and from round three onwards start to press.

"It was a good learning experience."

A rematch with rival Joshua, should he lose against Usyk, is easy to sell and one which could capture the imagination of boxing fans.

Time will tell what the future has in store for Whyte, but the night belonged to Fury - one of, if not the greatest, British heavyweights of all time and a future hall-of-famer.