Mobile telecoms operator, Tigo Ghana Limited as part of its support towards this year’s FIFA World Cup tournament, has launched a campaign dubbed the ‘Crazy Fan’ campaign to excite and whip up the interests of fans and patrons during the games.

The ‘Crazy Fan’ campaign by Tigo is a global online fan-based campaign being rolled out by all subsidiaries of Tigo across the world to capture and celebrate memorable moments of supporters during the tournament.

The soccer fiesta scheduled to be staged in Brazil in June is the biggest competition in football and Ghana, as a football-craze nation has all its eyes set on the soccer fiesta with the Black Stars taking part.

At stake for fans during this campaign are mouthwatering prizes and other souvenirs from Tigo.

All one needs to do to be part of this campaign is to dress ‘crazily’ and have your photo uploaded online onto Tigo’s Football Madness hub of Facebook.

Fans would be able to have access to the highlights of the campaign on their ‘feature’ and ‘smart phones’.

The ‘craziest’ fan as well as the best-captured emotional moments and videos will be rewarded after a draw.

As part of the campaign, Tigo will also be holding online interactive games to test the football knowledge of fans.

Fans who are also able to correctly predict the score lines of games during the World Cup games will be given prizes.

Fans can play games online and win incredible prizes as well as test their football knowledge and luck on the Tigo Match Predictor.

Speaking at the launch of the campaign, the General Manager of Tigo Ghana, Roshi Motman stated that the initiative forms part of Tigo’s aim to reach out and interact with innovative soccer fans on the network and the general public as a whole. 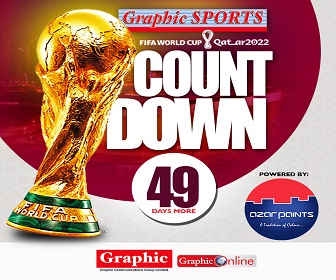