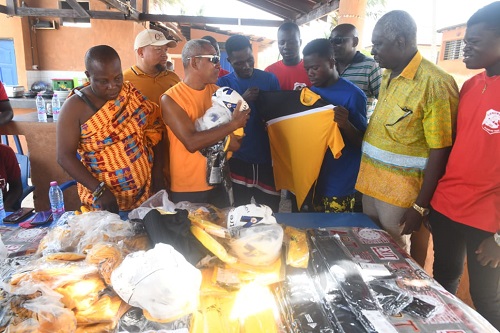 Sankofa Beach Resort, a resort located in Langma has promised to construct a stadium and provide a bus for the local team, Langma FC.

Besides, they have promised to support the team to ensure it achieve its dreams of qualifying to the premiership.

The Chief Executive Officer of the beach resort, Masao Meroe, made the promise when he donated 30 pieces of football, three sets of jerseys and hoses among many others needed by the club.

The sponsorship package was in response to an appeal made by the management of the third division club to the beach resort for support to enable them to advance to the next stage of the league.

Mr Meroe said the move formed part of their corporate social responsibility having operated in the community for the past 22 years.

A football Administrator and a former member of Premier League Board, John Odupong Wellington, who facilitated the deal said he was touched by the talent of the players when he first saw them at training, to help.

'' Hearing the challenges of the club and their aspirations to play in the premiership, I approached the management of the resort if they could assist the club'', he said.

The captain of the team, Harrison Tei Doseh , thanked the management of the resort for the gesture and promised to put the items to good use.

The traditional leader of Langma, Nene Ohimeh II, was hopeful the items would improve the performance of the club.

"I expect that in the near future Langma would produce quality players in the country to play for the Ghana Black Stars", he said.

The coach of the team, Mathias Otumi, was proud about the team’s performance so far stating that they have played three matches in the Division Three league, won two and drawn one game with about 15 more matches to be played in the Ga South Zone.