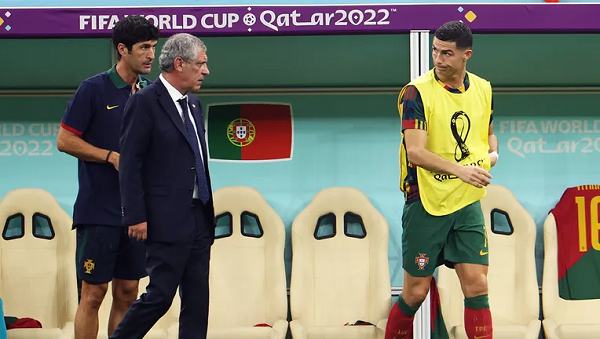 The Portuguese Football Federation (FPF) has denied that Cristiano Ronaldo threatened to leave the World Cup.

Portuguese publication Record claims the forward, 37, made the threat after being told he would not start their last-16 game against Switzerland.

In the previous game against South Korea, the Portugal captain reacted angrily when he was substituted.

The FPF said: "At no time did Cristiano Ronaldo threaten to leave the national team during the stay in Qatar."

Ronaldo left Manchester United by mutual agreement before Portugal's World Cup opener after a controversial interview in which the five-time Ballon d'Or winner criticised the club.

Ronaldo was substituted off the field in both of Portugal's opening games and coach Fernando Santos said he "didn't like" Ronaldo's reaction when he was again replaced during the 2-1 group defeat by South Korea.

Goncalo Ramos started instead of Ronaldo against Switzerland and the 21-year-old scored a hat-trick in the 6-1 victory.

Ronaldo, who is Portugal's most-capped player (195) and all-time leading goalscorer (118), was used as a late substitute in that game but, afterwards left the field while his team-mates were still celebrating.

"Cristiano Ronaldo builds up a unique track record every day at the service of the national team and the country, which must be respected," added the FPF.

"The degree of dedication of the player most capped by Portugal was again demonstrated - if necessary - in the victory against Switzerland, in the round of 16 of the 2022 World Cup."

Portugal face Morocco in the quarter-finals on Saturday (15:00 GMT).

Ronaldo did not train with the other substitutes after Wednesday's game, instead taking part in a gym session alongside those that started against Switzerland.

After the FPF statement was released on Thursday, Ronaldo tweeted: "A group too close to be broken by outside forces. A nation too brave to let itself be frightened by any adversary.

"A team in the truest sense of the word, which will fight for the dream until the end. Believe with us."