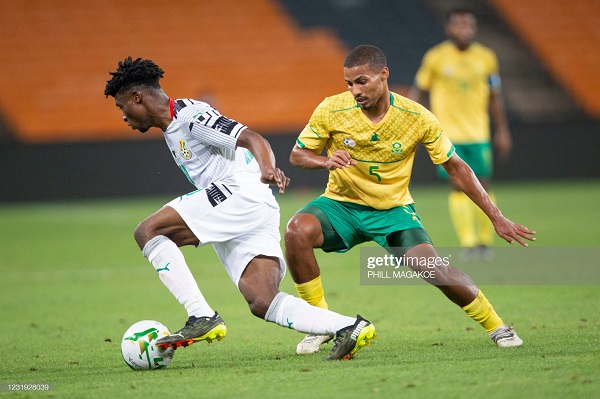 Ghana’s Black Stars yesterday secured qualification to the 2022 Africa Cup of Nations tournament slated for Cameroun after they held South Africa to a 1-1 draw at the FNB Stadium in Johannesburg on Thursday.

Mohammed Kudus’ goal just after recess broke the deadlock and minutes later, Percy Tau cancelled the lead to give his side a slim chance of making it to the competition while the Black Stars secured Ghana’s ninth straight qualification and 23rd appearance to the continent’s flagship competition.

After a scoreless first half during which Ghana survived some missed chances by the host team, the Ajax midfielder put Ghana ahead four minutes after recess. But Charles Akonnor's side failed to hold onto the lead and allowed Brighton and Hove Albion marksman Tau to finish off a swift attack on right, scoring with a beautiful ground shot past the outstretched Ghana goalkeeper Razak Abalora in the 52nd minute to give the Bafana Bafana a qualification lifeline.

It was not a high quality match as Coach Akonnor’s second string side rarely created scoring chances in the first half except for a feeble free-kick by stand-in skipper, Mubarak Wakaso in the 25th minute which was calmly dealt with by goalkeeper Ronwen Williams.

By the fifth minute, the Black Stars were sweating under the attacking prowess of Tau and Ruzaigh Gamildien who combined effectively to split the Ghanaian defence to locate an unmarked Themba Zwane but his effort hit the side of the net.

Zwane had another opportunity to put his side in front after their playmaker Tau had virtually walked through the Stars defence to set up his teammate who again missed the target. It was a big relief to the Ghanaians who had their backs to the wall.

Ghana’s play lacked creativity and for most part of the first half, they were unable to string passes together or even threaten the South African goal area except for some deft touches from midfielder Kudus which provided glimpses of what the team was capable of accomplishing.

When they returned from recess, the Ghanaian side unexpectedly changed their approach by opening up and relying on long range passes, one of which found the Ajax youngster who outrun two South African defenders to slot home for the opener, in a similar fashion as his goal against the Bafana Bafana on November 14, 2019 as Ghana secured a 2-0 win against the reverse fixture in Cape Coast.

Coach Molefi Ntseki’s team came in strongly after the goal and forced the Black Stars into some desperate defending and in the 52nd minute, tormentor-in-chief Tau was put through on the right flank by Gamildien, and the skilful forward burst into Ghana's penalty box to fire the ball past Abalora for the equalising goal and a valuable point that kept their hopes alive.

A minute later, Kudus was on the offensive after a wild run but his ambitious 25-yard shot missed the target narrowly.
Ghana’s defensive frailty was once again exposed by the South Africans when a combination of Tau and Rivaldo Coetzee located Luther Singh but he fluffed the effort from a close range.

At the other end, it was left-back Baba Rahman who launched an offensive from the flanks and cut in to the edge of the box to set up midfielder Afriyie Acquah but the carpet shot missed the upright narrowly.

In the 78th minute, the South Africans launched another attack but this time, Siyanda Xulu managed to pull a brilliant save from goalkeeper Abalora and Abdul Ganiyu reacted timeously to clear the rebound.

As the clock ticked towards the end the match, the hosts pressed hard to find the winning goal but the Stars defence marshalled by Nicholas Opoku and Ismail Ganiyu managed to keep them at bay until the game came to an end.