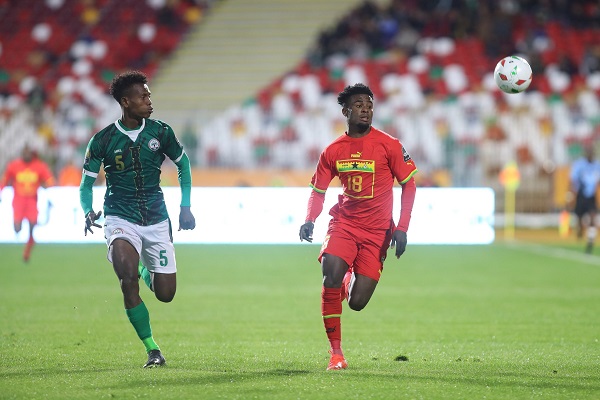 Black Galaxies Daniel Afriyie Barnieh in a hot pursuit of the ball with his Madagasca opponent
30.5k Shares

Ghana’s Black Galaxies made a faulty start to their Championship of Africa Nations (CHAN) campaign in Constantine, Algeria, last night when they lost 1-2 to Madagascar in their opening Group C match.

Solomampionpona Razafindranaivo opened the scores in the 11th minute after which Tokinantenaina Randriatsiferana increased the tally in the seond half, before substitute Augustine Agyapong got a consolation for the Ghanaians.

Ghana started on a bright note but underestimated the potential of the Malagasies. And just when they seemed to command the biggest share of possession, they were shocked by the underdogs.

By the 11th minute they were shocked following a defensive blender from the right black, Augustine Randolph who lost possession to allowed Solomampionona Razafindranaivo to whipped in for the first goal in the 11th minute.

The Black Galaxies had themselves to blame after squandering many chances, including a 90th minute fortune when Daniel Afriyie Barnieh had only the goalkeeper to beat but saw his effort punched away.

A minute after Ghana had conceded the goal, Barnieh seemed to have been tripped in the Madagascar box forcing referee Mutaz Ibrahim to award a penalty. But after consulting the Video Assistant Referee (VAR) the Libyan official changed his decision to the disappointment of the Ghanaians.

After taking the lead, the new entrants showed little respect to the Black Galaxies as they matched them in every department of the game.

In their attempt to equalise, the Black Galaxies began to dominate as they attacked from the flanks. One of such moves saw Augustine Randolph locating Barnieh with a long cross but his effort missed the target narrowly in the 16th minute.

As the Galaxies tried to fight back, their constant slips on the turf made ball control difficult for them, giving Madagascar the upper hand, with Razafindranaivo giving the Black Galaxies defence a hell of trouble.

In the 36th minute Ghana were presented with the clearest opportunity when Razak Yussif had only the goalkeeper to beat but ballooned the ball over the crossbar.

Five minutes before recess, Madagascar once again threatened the goal area of the Black Galaxies but goalkeeper Danlad Ibrahim made a spectacular save to deny the opponents another goal.

Ghana came back strongly in the second half as Coach Annor Walker withdrew skipper Gladson Awako and replaced him with Seidu Suraj to help Ghana contain the Madagascar midfield.

But just when Ghana seemed to be finding their rhythm, Randolph committed another blunder by giving away the ball to Tokinantenaina Randriatsiferana to slot home for the second goal.

Just after that setback, Coach Walker replaced Randolph with Augustine Agyepong who made an instant impact in the 68th minute when his long tricky volley beat the Madagascar goalkeeper.

Ghana subsequently wasted more chances in their quest to snatch the equaliser as they looked jittery anytime they came close to scoring.

Deep inside added time, the Black Galaxies came close to scoring again with Barnieh firing from close range but the goalkeeper pushed the ball back into play only for David Abagna to shoot wide to the relief of the Malagasies.