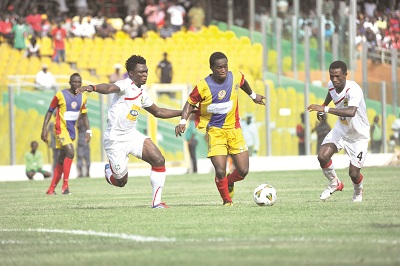 Some football fans appear not have learnt any lesson from the May 9, 2001 Accra Stadium disaster as there was a near re-enactment of the dreadful act yesterday after a dramatic 1-1 drawn game between Hearts of Oak and Asante Kotoko.

For perceived injustice, angry fans of the two clubs — the main protagonists in the May 9 tragedy — vented their anger on Referee Yakubu Nuhu Liman, who handled their 24th week Glo Premier League game at the Accra Stadium yesterday.

The referee had to run for cover under heavy security guard into the tunnel after fans at the infamous North Wing stand, lampooned and hurled bottled water at him to register their protest.

Fans of either side accused the Wa-based referee of strange interpretation of the rules of the game in favour of the other.

But the drama was long anticipated by the security personnel on duty when minutes before kickoff, a group of alleged Hearts fans invaded the inner perimeter to dismantle a symbolic wreath, allegedly laid by Kotoko fans behind the goal post at the International Conference Centre end of the pitch in remembrance of the 127 fans killed during the 2001 disaster.

However, in an apparent suspicion of foul play and signals that the wreath had been placed there to hypnotise the Hearts players, the fans moved in with dispatch to remove the items while the security personnel struggled to prevent them.

But that was a foreshadowing of the main drama after the match which nearly pitched one side against the other.

Hearts took the lead in the 27th minute through an individual brilliance of hardworking Winful Cobbina, who raced from outside the penalty box and delivered a ground shot to the right corner of the post, beating Kotoko’s Burkinabe goalkeeper Soulama Abdoulaye completely.

That goal brought Hearts out of their shelves after their initial strategy of playing on the counter. A brief attack by Kotoko in the opening minute was enough to put the fear into their opponents but that threat soon fizzled out as they surrendered the midfield to the Phobians, who demonstrated strength and good ball possession.

Evergreen Obed Ansah, Cobbina, Owusu Bempah and Moro Abubakar were in their elements stringing passes together with ease and surging forward occasionally to support lone striker, Mahatma Otoo, in search of goal.

But Kotoko relied more on their physique and quick attack where the experienced Michael Helegbe occasionally ‘danced’ around the Hearts defenders while teammates Seidu Bancey, Issah Yakubu and Abdul Aziz harassed with much potency.

However, Hearts should have sealed the match in the first half after Cobbina’s goal but fluffed some good scoring chances, including Ansah’s miss in a one-on-one situation following a swift, three-man move involving Otoo and Bempah.

Hearts coach, David Duncan’s second half substitution nearly delivered the game to Kotoko after the exit of Ansah and Cobbina for Kofi Abanga and Ashittey Ollenu respectively.

The hitherto oily and vibrant midfield of Hearts grounded to a halt and Kotoko rightly took advantage and pummelled the Phobians.

After series of corner kicks, Helegbe gave a Kotoko a deserved equaliser with a cheeky header following an aerial miscalculation by goalkeeper Tetteh Luggard who left his goal-line bare in an attempt to  to punch an inswinger.

But the game became open thereafter as each side failed to utilise their chances, with substitute Gilbert Fiamenyo hitting the woodwork for Hearts minutes after coming on, while Kotoko’s Richard Mpong fired off target with only Luggard to beat.