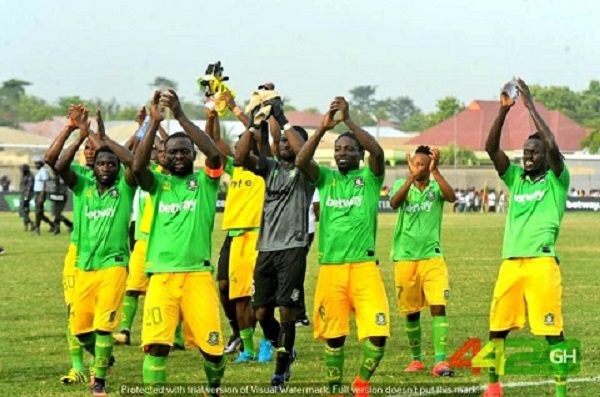 It was midfielder Emmanuel Gyamfi who stole the show with a man-of-the-match performance as he scored a brace in the 67th and 72nd minutes to burst Chelsea's in the five-goal thriller.

It was Aduana's fifth straight victory as they maintained the top spot on the league log with 20 points, three points adrift of second-placed King Faisal who are in action tomorrow.

It was a closely fought match as they took the game to the home side but failed to find the back of the net as the first half ended barren.
However, Aduana began to dominate the exchanges after the break in search of the opener until Gyamfi broke the deadlock in the 67th minute with a brilliant goal.

The midfielder was on hand again in the 73rd minute to increase the lead as Aduana finally broke their regional rivals' resolve and run the show.

The 'Ogya' lads raced into a 3-0 lead and put the game beyond recovery as Sam Adams scored his side's third goal in the 86th minute much to the delight of the home fans.

Surprisingly, the Berekum-based side put up a late fight as the home side took their foot off the pedal and conceded a late penalty which was converted by Stephen Anokye Badu.

Two minutes into added-on time, Isaac Osei Kwakye scored Chelsea's second goal to reduce the tally but it was too late to deny the home side a deserved victory for the fifth straight win.

At the Cape Coast Stadium, Accra Hearts of Oak continued their resurgence with a 2-0 victory over Accra Lions.

Forward Kofo Kordzi put the Phobians ahead in the 61st minute and Daniel Afriyie Barnieh scored four minutes later to give his side a second straight victory for Coach Samuel Boadu's side who moved up to the 12th position on the league log, while Lions slipped to the 15th position just above the relegation zone.