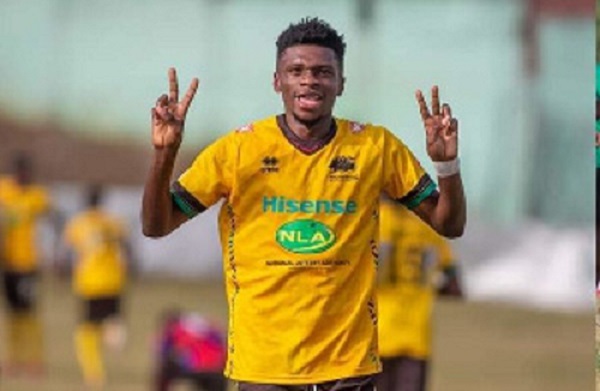 KUMASI Asante Kotoko needed a brace by their Cameroonian striker, Frank Mbella Etouga, to return to winning ways as they defeated the Legon Cities with a 2-1 at the Theatre of Dreams, Dawu yesterday.

Kotoko started the 2021/22 Premier League season on a whirlwind fashion with four successive victories but suddenly went three matches without a win and subsequently dropped from the top position on the league log.

Until Coach Prosper Goum Nartey and his side turned things around yesterday, they were held by Karela United to a scoreless draw at Aiyinase, lost 2-3 to King Faisal Babies in a local derby and split points with Real Tamale United in a 1-1 drawn game in Kumasi last week.

However, Kotoko found a hero in Mbella yesterday as his goals powered the Porcupine Warriors back to the second position on the log behind Aduana Stars with a game in hand.

Mbella got his side ahead in the 29th minute but the Porcupine Warriors defence went to sleep and allowed Cities defender Ahmed Rahman to ghost past his markers to head home the equalising goal three minutes later and punish goalkeeper Razak Abalora for a costly error.

The two sides attacked in each other, especially in the second half, but Abalora pulled off some heroic saves to keep his side alive until Etuoga's connected home Stephen Amankona's cross into the home side's penalty box with a perfect touch score his second goal of the match.