What KKD said about Finance Minister's firm, borrowing and the reaction [VIDEO] 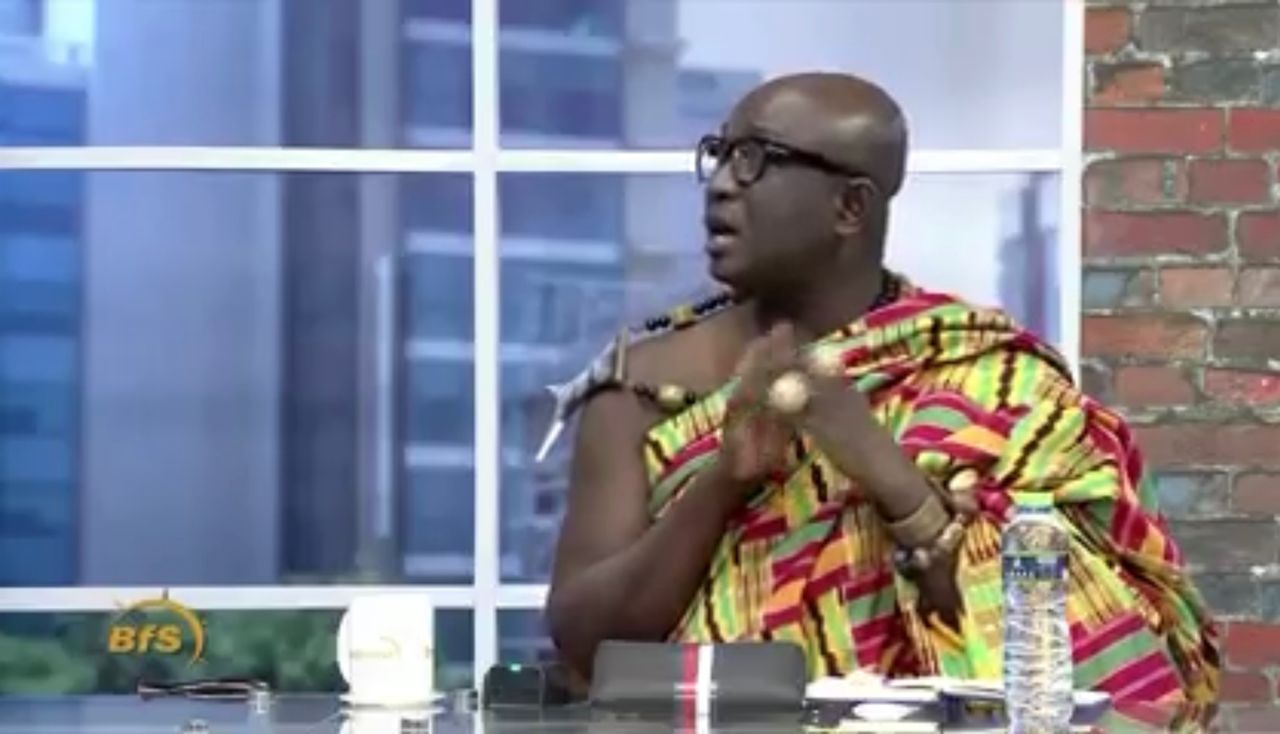 What KKD said about Finance Minister's firm, borrowing and the reaction
30.5k Shares

Popular master of ceremonies (MC), Kwasi Kyei Darkwah, (KKD) speaking on GTV's Breakfast Show this week said he has just read a report that a firm associated to the Finance Minister, Ken Ofori Atta is an advisor to the Ministry of Finance.

KKD said that report "broke his heart", because to him, a company associated to the Finance Minister, or his former company stands to benefit anytime Ghana goes to the international market to borrow.

He said he saw how "much Ghana owed" and the fact that he found out that the firm is a transaction advisor to the monies Ghana borrow.

"So as Ghana gets poorer, the Minister of Finance's company or former company, gets richer," he alleged.

The video, [attached below] has gained social media traction and is being shared on many platforms.

Attached below is a recall of the response dated June 1, 2021 issued by the Ministry when the issue came up in 2021.

PRESS RELEASE IN RESPONSE TO SOCIAL MEDIA ARTICLE ON FIRMS OF OFORI-ATTA, ADU BOAHEN APPOINTED ADVISORS TO THE FINANCE MINISTRY

The attention of this Ministry has been drawn to an article circulating on social media headlined, ‘Firms of Ofori Atta, Adu Boahen appointed advisors to Finance Ministry’.

The story relates to the development of Ghana’s domestic market for government bond issuance which is a key debt strategy in accordance with Section 58 of the PFM law and a recent public notice issued by the Bank of Ghana titled “Licensed Primary Dealers (PDs) and Bond Market Specialists (BMSs).

This Ministry would like to state that the selection of the Primary Dealers [PDs] and Bond Market Specialists [BMSs] is an automatic process based on market performance and historical secondary market trading activity which is publicly available and cannot be manipulated by the Ministry of Finance [MoF] or the Bank of Ghana [BoG].

Since 1996, the Ministry of Finance with the Bank of Ghana has developed and implemented various policies which affect the issuance and trading of Government of Ghana debt securities (Treasuries and Bonds).

The ultimate objectives of these policies are to develop an efficient fixed income market, strengthen the capacity of local institutions and deepen financial intermediation.

Based on this background, This Ministry would like to clarify the matters arising as follows:

1. It is our understanding that the firms in question that the story refers to are Databank and Black Star Brokerage. The Ministry would like to state that the claim that these two firms have been appointed as advisors to the MoF is incorrect.

2. Databank and Black Star Brokerage are two (2) out of nine (9) firms that have been selected by BoG/MoF as Bond Market Specialists and not Advisors to MoF, the other firms selected to be BMSs are – Ecobank, Stanbic Bank, ABSA, Cal Bank, GCB Bank, Fidelity Bank, and IC Securities. As stated above, the selection of the firms was solely based on their historical performance on the Bond Market and no other consideration.

The Ministry of Finance or the Minister and/or his Deputies have absolutely no hand in the selection process. The process cannot also be subject to any manipulation as it is based solely on historical data of trading and performance which is a matter of public knowledge on the bonds market

5. Secondary Market fixed income trading data for non-bank financial institutions, which is publicly available put Blackstar Securities as the highest trader by value for the period of assessment. IC Securities and Databank placed second and third in the rankings respectively. This information is publicly available from the GSE but for ease of reference has been reproduced here.

6. It is the opinion of the Ministry of Finance and the Bank of Ghana that this selection process rewards meritocracy, ensures transparency in the selection process and provides this Ministry with a selection of highly capable and motivated institutions with the opportunity to become Primary Dealers and BMSs if they perform. If any other firm in the period posted a performance higher than the selected three firms, they would have automatically been selected as Primary Dealers. Indeed, the selection is solely based on historical data and performance and no other consideration.

7. The article goes on to claim that the three (3) advisors including Databank and Black Star stand to make over GHS210 million in fees. This is inaccurate, misleading and intended to procure cynicism against the process. First, there are nine (9) and not three (3) BMSs. Secondly, BMSs are paid based on performance. They are paid a percentage (this was 0.5% in the past) of the value of total funds each of them manages to raise or based on the value of the bonds they each manage to sell to investors. This means their compensation is based on their ability to convince investors to buy GoG bonds.

8. The allegation by the author that the Ministry is involved in reckless borrowing is totally untrue and without substance. Any borrowing by MoF is strictly determined by the deficit target for the year as approved by parliament, the appropriation bill and maturities falling due during the year. In fact, this govt has demonstrated exceptional fiscal discipline evidenced by the fiscal deficit below 5% prior to COVID despite the financial sector bail out costs [including the repayment of depositor’s funds] and the energy sector excess capacity charges which have to be paid.

9. The issue of conflict of interest does not arise in this case because the selection process is purely based on meritocracy and the value of each firm’s secondary fixed income market trading activity as captured on the stock exchange. This data is publicly available and as such, the outcome cannot be influenced by the representatives of the Ministry of Finance or BoG. Additionally, fees paid to BMSs are performance based and are a percentage of funds raised by the individual firms and hence are not determined by MoF nor BoG. This Ministry will like to reiterate again that the selection of the firms was solely based on their historical performance on the Bond Market and no other consideration.

10. Additionally, both Ken Ofori-Atta and Charles Adu Boahen are no longer involved in anyway with the day to day operations of either Databank or Black Star. Mr Adu Boahen resigned from the Board and from management of Black Star back in Jan, 2017 immediately after he was nominated by the President as one of his Deputy Ministers for Finance. He also transferred his shares in the company to a holding company on assumption of public office. Mr Ofori-Atta resigned as Executive Chair of Databank in August 2012 and resigned from all the Databank Boards in February 2014.

11. The author claims that GHS 250 billion was borrowed over the last 4 years with Databank acting as a transaction advisor for the total amount and as such earned GHS 875 million in fees over the last four years! This is not true. Firstly, Databank acted only as one of the Co- managers on the Eurobond transactions. Over the last four years (i.e 2017-2020) GoG has only issued US$8 billion in Eurobonds. Co-managers are paid up to 0.10% of the international joint lead managers fees (circa 0.35%). All the co-managers share the 0.10% and not 0.35% of the total bond issuance value as stated by the author.

12. Secondly, total borrowing over the last 4 years has not been GHS 250 billion. The nominal total debt stock has increased by GHS 169.45 billion; from GHS 122.17 Billion in 2016 to GHS 291.61 billion in 2020. Refinancing of existing debt stock never increases the debt stock. The reasons for the nominal debt increase include: a non-cash increase due to currency depreciation, program loans contracted but not disbursed, concessional loans, commercial loans and other financings that Databank was not involved in. The claim that GHS875 million was paid in fees is therefore impossible to conceive and totally misleading. The author just multiplied a perceived GHS 250 billion by 0.35% to arrive at GHS 875 million.

13. The author concludes by asking the question; Who Watches the Watchman? It is very important to note that the bond market is heavily regulated and the new guidelines and code of conduct ensures greater governance and adherence to best practices in the world. A Board Member of the Bank of Ghana or the CEO of SEC cannot unilaterally influence an independent board for decisions on policy. Matters of PDs and BMS are not matters for the Boards to decide. These are operational activities that are efficiently designed to be transparent and efficient whilst encouraging competition and protecting the consumer.

1. The Ministry of Finance and the Bank of Ghana announced a list of Primary Dealers and introduced a new category called Bond Market Specialists. During a number of Technical Assistance Missions carried out by the International Monetary Fund (IMF) between 2019 and 2020, a revision to the Primary Dealers mechanism and the introduction of Bond Market Specialists (BMS) were recommended. The current state of the bond market in Ghana, which includes the emergence of a domestic institutional investor base, focus on longer maturity and higher duration bonds, required a BMS framework to combine bond purchase and distribution with market making and duration management. The BMS is a means to improve the liquidity of the secondary market by bringing institutions under stricter obligations for the marketing, sale, distribution and trading of government bonds.

2. Following from this, revised guidelines for the Primary Dealers and a new guideline for the BMS in addition to their requirements and responsibilities were published on the Bank of Ghana Website for the entire market and the general public.

3. Subsequently, on 4th March 2021, the Bank of Ghana issued a notice to all Banks and Non- Banks Financial Institutions to apply to become Primary Dealers and Bond Market Specialists.

4. At the end of the deadline, 32 Banks and Non-Banks Financial Institutions applied. Out of this total submission, 23 met the infrastructure and minimum capital requirement to be PDs. Of the 23 who met the minimum requirement, 17 were approved to be PDs. This is a significant increase from the previous 12 PDs.

6. Consistent with the debt market reform agenda of Government, we have witnessed significant increases in performance on the market. The Ghana Fixed Income Market (GFIM) saw a record-setting year with GH¢108,405.3 million in trade volumes, exceeding the GH¢100,000.0 million target in 2020 by 8.4 percent.

7. Government securities recorded GH¢97,572.8 million in trade volumes during the same period, equivalent to 90.0 percent of the total trade volume in 2020.The record trading on the bond market was fueled by attractive real returns on fixed income securities and increased liquidity among banks and fund managers. Domestic investors accounted for 80.0 percent of trading on the market, up from 71.0 percent in 2019.

8. Liquidity jumped to 82.0 percent at the end of 2020, compared to 68.0 percent recorded at the end of 2019. The outstanding securities and the corresponding trade volumes over the last five (5) years are presented in Figure 5.11.