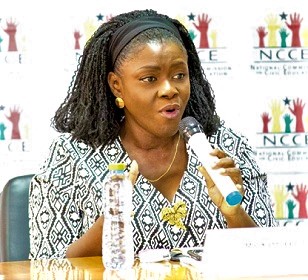 The National Commission for Civic Education (NCCE) has engaged Civil Society Organisations (CSOs) and other interest groups at a roundtable to solicit views on national efforts to review the 1992 Constitution.

Discussions at the meeting were centred on the Constitution Review Commission (CRC) report presented to the Presidency as well as a White Paper on the report.

The CRC is a presidential commission of inquiry that was set up in January 2010 to consult with the people of Ghana on the operation of the 1992 Constitution and on any changes that needed to be made to the Constitution. 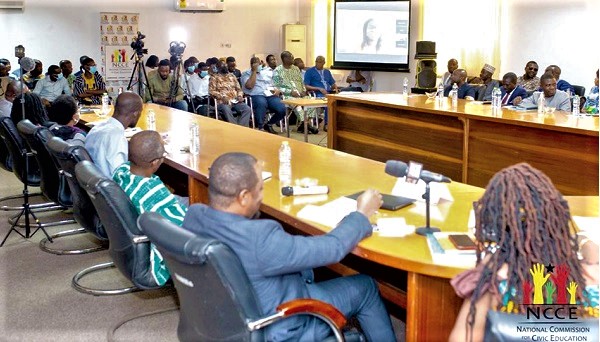 The Chairperson of the NCCE, Kathleen Addy, said the meeting formed part of a series of round table discussions aimed at garnering ideas, recommendations and more expert opinions on the way forward.

“At the end of the series of round-table discussions, we intend to put a document together and present it to parliament, the public and the Presidency. The idea is to trigger an action from one of the bodies in terms of constitutional reforms,” she said.

Discussants at the event shared varying views on whether or not constitutional reforms were needed to stir the affairs of the country.

The discussants included lecturer at the Central University, Suzie Afutu; a Senior Lecturer at the Ghana Institute of Management and Public Administration, Dr Justice Srem-Sai, and a Fellow with the London School of Economics, Maame A. S. Mensah-Bonsu.

Ms Afutu noted that there was the need for constitutional reforms, adding that the NDPC must be made autonomous both in terms of its membership and its source of funding.

“In terms of its membership, one way to achieve independence will be for the tenure of members to overlap that of the presidency.”

“This will also enable the commission to have a stable term of office to formulate and monitor the implementation of its strategic plan for the nation,” she said.

On the abolition of death penalty, she suggested that the it should be abolished and replaced with life imprisonment without parole.

On equality and freedom from discrimination, she appealed that the affirmative action bill in parliament be passed to provide equality for all.

Dr Srem-Sai, for his part, suggested that there should be a provision in the constitution that would allow amendment by petition.

“This means that if we are to get a number of citizens, who feel strongly on a particular issue and are able to mobilise about one million people to support it then that issue is worth pursuing by way of amendment,” he suggested.