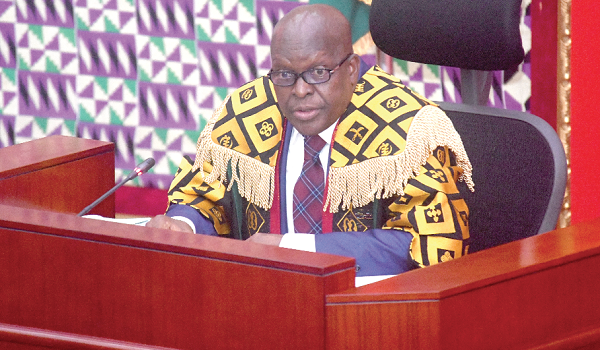 The Speaker of Parliament, Alban Sumana Kingsford Bagbin, has stated that the Supreme Court’s interpretation of Article 102 and 104 of the constitution has posed serious challenges to long-held conventions and the Standing Orders of the House.

That, he said, had also affected parliamentary business during the First Meeting of the Second Session of the Eighth Parliament.

He noted that a review of that ruling should end up giving a broader consideration to the issues guiding the day-to-day running of parliamentary business.

"The weakness in that interpretation, I believe, is what the Minority is seeking to test in the Supreme Court concerning the constitutionality of the passing of the Electronic Transfer Levy Bill. It is my fervent prayer that finality will be brought to this matter in the interest of Ghanaians," he said.

In an address read on his behalf just before Parliament rose for the Easter festivities last Tuesday, Mr Bagbin said a review of the ruling would bring finality to the matter that had posed challenges to the convention and practices of Parliament.

His remarks were delivered on his behalf by the Second Deputy Speaker of Parliament and Independent Member of Parliament (MP) for Fomena in the Ashanti Region, Andrew Amoako Asiamah.

The Supreme Court ruling on Article 102 and 104 of the constitution talks about quorum and also allowing Deputy Speakers of Parliament to exercise their votes even when presiding over proceedings in Parliament.

Since that ruling, the matter has become a bone of contention during meetings of the House and affected proceedings.

Mr Bagbin noted that in spite of the challenges the House encountered during the First Meeting of the Second Session of the Eighth Parliament, the House still stood strong and determined to fulfill the mandate which the good people of Ghana had bestowed on Parliament.

The difficulties the House encountered, he said, was with regard to the constitutional interpretation of its long-held conventions and Standing Orders.

"This, I believe, only sought to give deeper meaning to our parliamentary democracy. I am happy to say that in the end, though the issue is not completely resolved, the House still stood strong and determined to fulfill the mandate which the good people of Ghana have bestowed on us," he said.

Mr Bagbin noted that the nature of the Eighth Parliament demanded that the legislature and the executive work together more than ever, due to the current composition of the House.

"The days when the House was controlled by decisions which always went in favour of one side, and which sought to only front for the executive are no more. It is for this reason that the House, during this meeting, went through some tough periods," he stated.

He gave the assurance that the House would continue to play its critical oversight and accountability function in spite of the challenges encountered during their meetings before the House rose for the Easter break.

Delivering the closing remarks on behalf of the Majority Leader, Osei Kyei-Mensah-Bonsu, the Deputy Majority Leader, Alexander Afenyo-Markin, called on his colleagues in leadership to purge themselves of mistrust for each other, saying trust and confidence were the bedrock of consensus building.

The Minority Chief Whip and National Democratic Congress (NDC) MP for Asawase in the Ashanti Region, Mohammed Mubarak Muntaka, also in a speech read on behalf of the Minority Leader, Haruna Iddrisu, thanked his colleagues for the endurance they exhibited during the period.