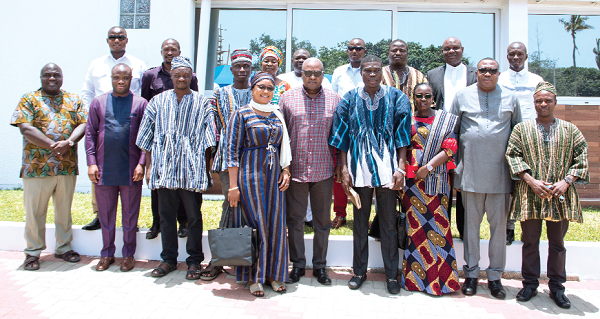 Former President John Dramani Mahama has urged the Gonjaland Youth Association to increase its advocacy for the government to live up to its responsibility and respond to the needs of the people.

He noted that the Savanna Region, being a new region, should have had its development priorities expedited.

He, however, assured the association that the next administration of the National Democratic Congress (NDC) would attend to the region's developmental needs.

Former President Mahama stated this when the newly elected executive members of the Gonjaland Youth Association last Tuesday paid a courtesy call on him to introduce themselves and also discuss issues of concern to the Savanna Region and other parts of the north.

A statement issued by the Office of former President Mahama said the issues discussed included the falling standard of education in the region, concerns about insecurity, chieftaincy conflicts, lack of potable water in many communities, the state of roads and tension between communities and Fulani herdsmen.

It said Mr Mahama decried the government's seeming lack of interest in continuing with a proposed College of Education project started by the NDC administration.

The college, he explained, could have provided teachers for schools in the region to help address the poor standard of education complained about by the executive members.

On how to resolve the matter of Fulani herdsmen, the former President suggested that the group liaises with the government to provide fodder for cattle grazing.

That, he explained, would forestall the cattle herds entering and destroying farms in search for food.

It said former President Mahama thanked the association for the visit and the opportunity to interact and discuss issues.

The statement said he also applauded the association for its efforts geared towards contributing to the development of Gonjaland.